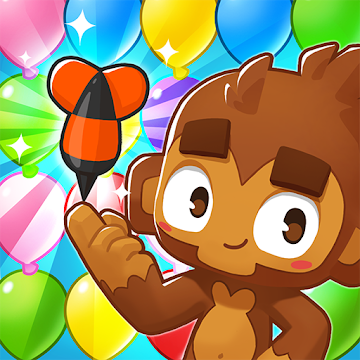 Bloons Pop! is the next product in the Bloons series from Ninja Kiwi. In the game, you will continue to return to the village of naughty monkeys and shoot and destroy colorful balloons.

After the intense battles in Bloons TD, Bloons Supermonkey, or Bloons Monkey City, the balloon pandemic has once again returned to Monkey town. Colorful balloons created a mess in the town. Your task is to help the monkeys use weapons to break all the balloons that appear on the map. From there, you can bring peace to Monkey town.
With funny and cute 2D images, the game has attracted more than 100,000 downloads even though it has only been released for about 1 month. The sound of cheerful background music and the sound of balloons exploding is also a big plus of Bloons Pop!.

At the beginning of the game, the scene of colorful balloons moving towards the houses sent the whole town into chaos. Monkey Max and his friends have been assigned by the mayor to destroy the balls to restore peace to everyone in the town. Get ready to start the thrilling battles of monkeys and balloons!

Your target in Bloons Pop!

Your only goal in Bloons Pop! is to complete the levels to restore Monkey town. Bloons Pop’s gameplay! similar to other traditional balloon shooter games. Levels are also unlocked based on your achievements. It means you have to complete a level then you can unlock the next level. To win each level, you need to break the required number of balls with the given weapons. On the map, you need to place the weapons around the path of the balloons. When the balls move into the control area of ​​a weapon, it automatically fires bullets at the enemy. Each weapon in the game has different damage and range.

However. You need to pay special attention to the balloons. If any ball crosses the boundary of the battlefield and enters the town, the level will fail. Or when you have used up all the weapons and the number of balloons on the map are still alive, you will also fail. You have a total of 5 lives to play. If these live numbers run out, you have to wait up to 1 more hour for them to recover.

By winning the levels, you receive cash and diamonds as rewards. You need to use them to restore the houses in the town that were destroyed by the bloons earlier.

The monkey is the main character in this game. You use them to burst the balloons. Each type of monkey has a different skill so you need to use them at the right time to destroy as many balls as possible. Monkey Collection in Bloons Pop! There are now 40 different types. When you reach certain levels, you can unlock new monkeys.

Besides the normal monkeys, there are also special monkeys called heros. Heroes will be unlocked automatically when you fill up the energy ring in the top left corner of the screen. You can speed up this process by combining monkey attacks and smart moves to destroy as many balloons as you can.

These special monkeys have completely different powers than the rest. They can destroy a large number of balloons in one shot. Besides the normal monkeys and heroes, Bloons Pop! allows you to combine 2 normal monkeys into a new monkey called Mega Monkey. This feature is activated after level 7. The rules are as follows: when 2 monkeys of the same type appear in 3 available shots, you can combine them together to create a Mega Monkey. Mega Monkey uses its special skill to destroy more bubbles.

Bloonspedia can be considered the encyclopedia of this game. Open this feature to see the information on all monkeys, items, powerups in the game. When you unlock new content in the game, you can view information about it at Bloonspedia. Besides, with each new item unlocked you get a Bloonstones.

Powerups are a familiar concept in many video games. It is special items that give great power to increase your chances of winning in the game. Here is the list of powerups available in Bloons Pop!:

Each time you complete a level, you will be rewarded with a corresponding amount of money and gems. You can also perform in-game quests to receive additional rewards. With money, you can use it to restore buildings or other decorations based on the location that the game has given. In particular, when you smash any 20 balloons on the main screen of the game, you will receive 1 Monkey Money. The game uses 3 main currencies: Monkey Money, Bloonstones and Bloontonium.

In which Monkey Money is used to power up monkeys and buy maps. They are also used for basic transactions like unlocking items… Bloonstones are rarer, it can be combined with Monkey Money to buy buildings and decorations to place in town. You can earn them as you pass levels. Finally, there are Bloontoniums, which are used to create gems using Bloontonium Collectors.

Also, you can earn extra money by watching the ads. In the Store, you click on any ad and you will be randomly rewarded with any of the 3 currencies mentioned above. It’s quite annoying though. You can also use Bloons Pop! which we have provided in this article to use unlimited money.

There are a total of 1000 levels in the game. Each time you pass levels, you have a chance to unlock Monkeys, Heroes, and Bloons cards. Some special levels will be marked as Hard or Extreme Hard. To complete these levels you need to be more careful in your shots. Completing a difficult level, you get more rewards.

Why you should use Bloons Pop! MOD?

Bloons Pop! is an interesting game with thousands of challenges waiting for you to conquer. However, there is a lot of content in the game that you need to unlock with Money and Bloonstones. You will need a lot of time to accumulate enough money to unlock these items. Therefore, use Bloons Pop’s mods! is a simple way for you to achieve the goals in the game.

Lots of Money/ Bloonstones: You get a lot of money in the game without doing anything. You can then use them to buy items.

Bloons Pop! uses familiar gameplay that many gamers consider being similar to classic brick-breaking games. You just need to touch the screen with your finger to adjust the angle of the shot to break as many balloons for one shot as possible. Download the latest mod version of the game via the link below.