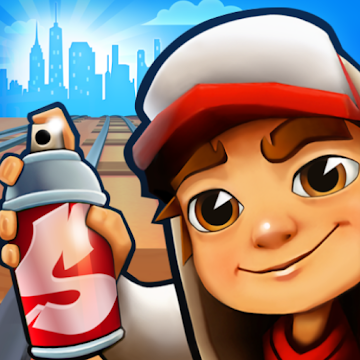 Subway Surfer is the most popular endless running game for Android with over 1 billion downloads on the Play Store. Download the latest Subway Surfer mod at APKmazon to unlock everything in the game for free.

When asking for the opinion of anyone about what they think is the most famous game genre on the market today, the answer “endless running” will not be too surprising. With simple gameplay but high appeal thanks to the competitive vibe, this genre has been and is being loved by many gamers. An indispensable game when it comes to endless running is Subway Surfers from the publisher Sybo Games. First launched to the public in 2012, the game has won a lot of attention immediately and has reached more than 1 billion downloads on the Google Play platform up to now.

Subway Surfer has become the icon for the game genre Endless Runner on mobile. Currently, the game still has a community of players with millions of people around the world. The developer also regularly updates new game content with lots of new events and items. Join us to discover more about the reason for this mind-blowing number in the article below.

In the game, you will play the role of a rebel teenager named Jake who bears a huge love for graffiti art. This time, while he was showing his talents on a train, he was spotted by an angry security of the station with his grumpy dog. Jake has no choice but to run as fast and far as his can and you are the one will help him doing this.

There will be 3 tracks for you to run and swap on by swiping left or right. You can also swipe down to roll and up to jump, based on certain situation. Each, however, will contains a bunch of obstacles that you have to avoid such as trains, traffic lights, barriers, etc. As it is said in the genre, “endless running”, which means there will be no finish line, no stop, no rest, just running and running in order to achieve the highest point that you can. If you run into an obstacle without being able to dodge it, the security and his dog will teach you a lesson about doing graffiti at places that you shouldn’t do it.

Hoverboarding on train tracks? It may sound impossible in real life, but in subway surfers, yes, yes you can! Whenever you feel like danger is coming but there is no time to avoid, just do a double-tap and there will be a board magically appears under your feet to save you. The board acts like a shield that will save you from a collision one time and have a cooldown. So, make sure to use it wisely as it obviously a lifesaver.

The number of your board will decrease by 1 each time you use it, so, be sure to check on them before each run. However, it is not a very rare item as you can easily purchase more of them in the shop with coins.

What’s more? The board also comes with skins and unique special powers that will provide great helps both in styles and in game. Some of them can be obtained by coins but some can only be bought by special keys.

Power-up on the go!

The game will be harder and harder as your score go up. But, with the help of power-ups that randomly appears on the tracks, climbing the rank will be a piece of cake. There are 4 power-up in total, each will help you in a different way, but all are super effective.

The first power-up is the Jetpack. Upon picking it up, you will be able to fly above every obstacle for an amount of time and collect a lot of coins. Next, we have the coin magnet, which will make all the coins fly towards you. The Super Sneaker will boost your jump, make it higher for an amount of time. Finally, the 2x Multiplier will double the point you gain for a short period.

All of the power-ups are upgradable, which means its duration can be greatly lengthen. You can do that by spending coins in the shop.

Well, it seems like not only Jake has the hobby of performing graffiti on trains, but also his friends! The skins can be unlocked with coins, keys, or by participating in limited-time event, waiting for you. Sybo has over 20 different characters for you to freely choose your favorite one from a zombie, cowboy, to a robot, you name it! However, the fun does not just stop there. As you have found your favorite, you can even unlock 2 more unique outfit for your characters to get in the action with styles!

Some characters are not available in the game store and can only be obtained from lucky chests. Besides, there are some characters and items that appear only during the events of the game.

Graphics in Subway Surfers are a plus. Although released in 2012, the game’s graphics still make players happy after the upgrades from the developer. Besides, during the times of events in the game, you will see that almost everything in the game changes according to the theme that the event is aiming for such as background, outfits of characters, skateboards … Each new event in Subway Surfers takes you to a festival taking place in famous cities around the world. If you are a big fan of this game, you must have traveled to many big cities around the world such as Beijing, New York, Mexico, Singapore.

As we have mentioned plenty of times above, you can easily guess that the main currency of Subway Surfers is coins. This can be easily collected because they are literally everywhere in the game. Sometimes, the patterns of the coins are also the safe path to travel in, so you may want to follow that.

Another currency is the Keys. This, however, is quite rare and hard to collect. But you know what they say, hard work pays off! The keys are “the key” to unlock extremely cool things in the game that will definitely worth the effort. So, be sure to obtain as many as possible!

Subway Surfers is a great game to entertain you in a short time. There are no difficult quests, powerful bosses or many other troublesome things, the game takes you on endless chases filled with fun. However, there are a few different goals that you should conquer to make this game more interesting. Those are new characters that you need to unlock, items you need to upgrade, hoverboards you need to add to your collection … To be fair, if you want to unlock everything in the game, you will It takes a lot of time to earn coins and keys. Therefore, Subway Surfers MOD is here as a solution. We bring you the latest mod of this game. Here are the MOD features:

With an original genre but vibrant arts and playful characters, Sybo has definitely made an extremely great game this time. Download Subway Surfers MOD then join the fun now!