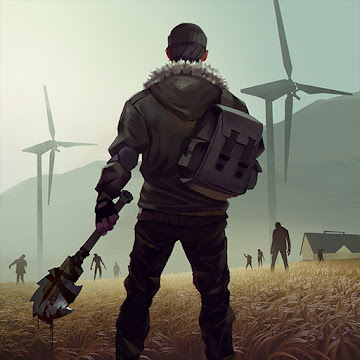 Become the last survivor of the pandemic, fight zombies and survive in a futuristic post-apocalyptic world in Last Day on Earth: Survival. Download the latest game mod to unlock advanced features and get unlimited resources.

In recent years, the MMORPG game genre is gradually emerging and gaining high positions in Google Play Store such as Adventure Quest 3D, Era of Legends,…. Today, we would like to bring you a survival game, with shooting and zombies involved, called: Last day on Earth: Dead War (LDOE). With more than 50 million downloads and owning a 4-star rating at Google Play, LDoE will certainly not let the fans of this game genre down.

Starting a fierce survival with just a pair of red shorts, you will need to collect all that is necessary for protecting yourself from zombies: food, water, shelter, and weapons,…. Apart from the zombies, the survivors also have to watch out for other players who invade your territory and try to steal your resources. When you have a solid defense system, you will be able to easily survive in the massive surge of zombies. Are you ready?

Key features of the LDOE

Last Day on Earth is the most popular survival game on Android. Thanks to the exciting gameplay and many other unique features, the game attracts millions of players daily. Let’s explore the outstanding features of this game now.

The survival shooting game Last Day on Earth takes place in a post-apocalyptic event. In 2027, the world saw an outbreak of an unknown, dangerous virus, destroyed almost all of humanity. It doesn’t stop there, all those infected with the virus began to turn into zombies. Those who are not affected by the virus due to having a special kind of blood have no choice but to try to survive and escape from the hunt of those dangerous zombies out there.

The world is now dominated by zombies. They roam the streets and attack any creature within reach. You and other survivors must hide in self-built bases. However, the need for food and water forces you to step outside. There are countless dangers waiting in the world out there, are you ready to face them?

The main goal of the game is to find as many resources as possible and create useful items. You will start off on a piece of land, with a small house, alone. From there you need to find and collect everything from food and water to weapons, clothes, and materials to craft other useful things. Finally, you can build a garden to produce food, a rain collector for water,…. Starting with the smallest, gradually you can have a truly comfortable home, a plentiful supply of food, and state-of-the-art defenses that will ensure your safety in this deadly pandemic.

Before you start, you need to create your character. The game offers some basic options to customize your characters such as gender, skin color, hair color, hairstyle, and beard. In this section, you can also change your nickname in the game. There are not many options for you to create a unique character in Last Day on Earth. However, the selection is probably enough to satisfy you.

You enter the game with some basic tools. Start your battle for survival by searching around and gathering resources. The resources in the game appear randomly on the map so if you are lucky, you have a chance to find the resources needed to craft important initial tools such as hammers, axes, saws, torches, and even are guns.

The resources that you collect are in their raw state. You need to combine them together to create items. Each item requires different materials. However, if you want to craft an item, you need its blueprints. Blueprints are unlocked when you reach specific levels. Besides, they can be unlocked with Craft Points (This point is obtained when your character levels up). Some Blueprints are found at certain locations and they cannot be purchased by Blueprints. Currently, LDOE has more than 150 blueprints, they correspond to the items that you can craft in the game.

The crafting system in the game is very diverse. You can create everything for survival missions including tools, weapons, vehicles, and structures. Always remember that crafting is the only way to survive in the game.

In LDOE, you are not the only survivor. There are other players who are also building their bases in different locations on the map. They are allies or enemies, it all depends on your choices. LDOE allows players to take risks to scramble for empty areas by fighting other players. You can also attack their bases directly to steal resources.

Don’t forget that your base can also be attacked by others. The battle for survival in the game is uncompromising!

The world in LDOE is vast. Therefore, you need to build vehicles to move faster to unlock new lands. In addition, vehicles can be used to transport resources. You need to search for blueprints to build a new vehicle. Currently, the game has the following vehicles: Chopper, Motorboat, ATV, Zombie Truck, and Mi-24 Helicopter.

Note that you need to be level 30 to unlock the Clans feature. You can open a new clan and manage it yourself, or join existing clans created by other players. You can only join one clan at a time. If you want to move to a new clan, you need to exit the old one. Members of the same clan can chat with each other on the common chat board or share/trade resources.

The world in the game is divided into areas with different locations. You need a map to keep track of resources and your location. As you step out of your base and travel further in search of resources, you need to check the global map. On the map mark the resources and their locations. Click a point, then choose how you want to get there using Drive, Run, or Walk.

Not all areas on the Global map are available at the start. You need to get the necessary materials to craft a map for each area. The more maps you craft, the more locations you unlock. The locations in Last Day on Earth are quite diverse. They include many different types of terrain such as plains, mountains, deserts, ice…

Sometimes you check a location that has a timer, which is the time that events are happening. These slots contain challenges that offer the opportunity to claim great rewards. However, they are not easy as you have to complete all the quests in that area.

Last Day on Earth: Survival owns 3D graphics with a perspective from the top down along with a quality sound system, promising to give players a real and thrilling experience while playing the game. So, we highly recommend you to wear headphones or connect to speakers if possible for the best quality experience with LDOE.

For new players, the following tips can be helpful to survive as long as possible.

It is a matter of fact that the higher-level zombies will bring you a lot more resources. However, you need to be careful because as the equivalent of the bargain they bring, winning these zombies requires more experience. So to avoid losing more than what you gained, make sure you can handle it before you start doing it.

The bunkers are not as safe as the name suggests. Here, it contains a large number of zombies that the player can hunt. Rewards in these shelters are experience and redemption tickets – which can be exchanged for chests. Rare items are mostly found in these chests. So remember to go hunting inside the shelter once a day.

This may not sound very nice, but in the end, you need as many resources as possible for your survival. After completing some missions, you will have a chance to raid the area of ​​some NPCs. But watch out for their revenge, you can lose more than you steal.

You need the energy to travel to new regions and make use of the resources there. You can still move back and forth when you run out of energy, but it will take more time. Unfortunately, this is an online game so changing the time on your device is useless. The energy will be renewed every day, so move properly to avoid your territory being robbed.

Last Day on Earth: Survival has some pretty cool features and will keep players for a long time. If you are looking for a survival game and love shooting and zombie genres, this game is a perfect choice.

robert bou assaly
everything is ok . keep going man . mod menu very excellent . you are the best . thanks
Reply - September 6, 2021