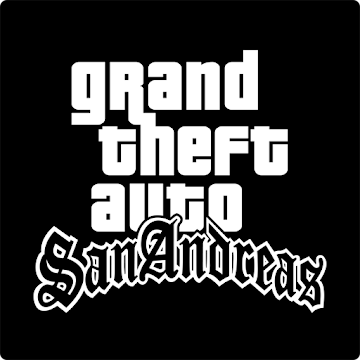 Download the latest Grand Theft Auto: San Andreas MOD for Android at APKmazon. This game belongs to the GTA series which is extremely popular with millions of fans around the world.

To celebrate the 10th anniversary of the release of GTA San Andreas on consoles, RockStar made a port of this game on mobile platforms. Accordingly, the Android version was officially available on the Play Store on December 19, 2013. You can currently buy the game on this app market for $ 4.99. Despite being a paid game, GTA San Andreas has reached more than 1 million purchases on the Play Store alone. It is one of the most successful versions of the GTA Series.

After a short time of release, the game quickly became famous and won many prestigious awards such as the VGX award for game of the year, the Gamespot award for the funniest game…. So, what has made such great success? Let’s find out right in the following article.

Join us to discover the great features of Grand Theft Auto: San Andreas.

You will transform into a member of the gangster gang Grove Street Families – Carl Johnson. But in the past 5 years, the gang has been almost divided, and the influence is very small compared to other gangs. So, you, along with the other three leaders of the group – Big Smoke, Ryder, and Sweet formulated a plan to take back the territory – the streets – are now in the hands of the rival gang, the Ballas, a gang that currently has a great influence on the city. You will only begin with small things to irritate them such as spray paint over rival gangs’ names to some fiercely head-to-head battles. But do not stop there, the game still has a lot for you to explore.

This game will certainly not make you feel confused because of a very simple motif: you control your character with a joystick around the map, doing the assigned tasks skillfully. The plot of the game also develops from there, into a book of the life of the main character – Carl Johnson in which you play the role.

Basically, the gameplay is not much different from previous GTA versions. Besides the action-adventure elements combined with role-playing, Grand Theft Auto: San Andreas brings a little bit of first-person shooter elements. The open environment in the game allows you to play freely according to your own role. If you don’t want to do story missions, there are still many other interesting things in the game. You can rob a car and drive it around the city to enjoy the view or visit a bar in the south of the city to flirt with girls… Even so, you still need to complete story missions to develop your character and unlock new content.

After completing all the quests and the game has reached a certain point, you can buy a house, make money in the real estate business so you can have more place to perform other tasks, and also revive and save game progress.

Like the previous versions, Grand Theft Auto: San Andreas builds a storyline completely following the expansion of the game map. You’re going to start in the Los Santos region and are limited here because according to the plot – an earthquake swept the transport system, making the area completely inaccessible. But not long after that, along with the development of the game progress, the remaining lands, along with quests, achievements, landscapes, … will be unlocked.

More specifically, some pretty special NPCs will be added as well. They may be characters that have appeared in previous games, providing connections between parts of the game. This makes you feel immersed in the universe of the vast Grand Theft Auto, although the gameplay has great differences in the stories themselves.

The authenticity of the game

To perform your adventurous missions, your character must be in the best health. GTA: San Andreas will keep track of the character stats as you play. The physical fitness index is arguably the most important – you need to eat well to avoid weakening your body and lead to only short periods of sprinting. However, the more you eat, the more you are at risk of being overweight, so sometimes you need to go to the gym to keep your body at its best. This will increase your character’s basic attacks, while also adding a little sprint time, allowing you to travel between locations faster – or run away from the police more easily.

Besides this, the game also records the stats of many other factors. Surely you have seen many times when your friends use pictures with the word “Respect +” to joke with each other but do not understand where this phrase comes from? So, to introduce to you, this is also one of the multiplier stats that the game records after you complete the assigned tasks – yes, that famous meme comes from Grand Theft Auto: San Andreas. Not all missions have money prizes, but the “respect” you get will increase steadily through successful missions. A higher “respect” score means more people will have a desire to join your gang and help complete tasks much more quickly.

GTA San Andreas offers a diverse weapon system. Currently, the weapon collection in the game has 38 items and 3 special items. Weapons in the game are divided into groups of melee weapons (knives, shovels, baseball bats), shotguns, submachine guns, rifles, sniper rifles, and heavy weapons. If you want to own a new weapon, you need to buy them from the shop.

The game also introduces a new mechanic called “Weapon Skill” with 3 levels of “Poor”, “Gangster” and “Hitman”. Each weapon is labeled with a skill-based on how skilled you are at using them. When you use a weapon long enough and make accurate shots, the item’s weapon skill will level up. Leveling up a weapon’s skill increases the weapon’s usability, and you also have the opportunity to use it more flexibly.

The vehicles in the game are also quite diverse including motorbikes, cars, bicycles, trains, planes, helicopters… Even if you don’t have enough money to buy a vehicle, you can still control them by robbing someone in the city.

Explore things to your own interest

The main quest of this game will strictly stick to its storyline and will pretty much give you the opportunity to walk every corner of the game’s map. You don’t have to worry about not getting the chance to fully explore everything. However, if you see something catchy while running errands like you do every day, why not giving it a visit? GTA: San Andreas is an open-ended game, after all, players are encouraged to discover everything themselves. You might encounter some funny easter eggs from the developer too!

Although released in the early 21st century, the game works with 3D graphics along with a large map – a very remarkable success of Rockstar Games. Besides, the sound is an indispensable factor when playing games because the recorded sounds are very realistic. Not only that, GTA: San Andreas also won the Gamespot award for best character voice game in 2004, so what are you waiting for without experiencing it?

With the original, authentic but intriguing gameplay, Grand Theft Auto: San Andreas is something you should try if you are a fan of the series GTA. Surely you will find it impossible to get your hand off the device just after some minutes of playing. What are you waiting for without downloading and trying it out right away!