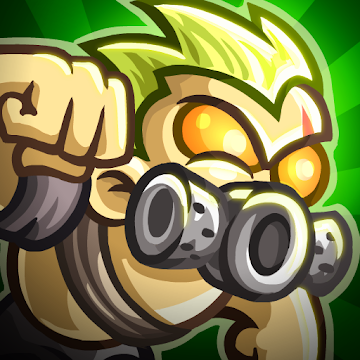 Junkworld, developed by the makers of Kingdom Rush, piqued the curiosity and anticipation of tower defense game lovers. The battle to re-establish a new world order between factions will impress you.

Ironhide Game Studio once made fans restless when it released two famous defense games: Kingdom Rush and Iron Marines. Recently, this company continued to announce a new free tower defense game in the series called Junkworld. The game will be released soon in Canada, New Zealand, the United Kingdom, Australia, and Uruguay. It promises to bring surprises in the action-packed gameplay and fast-paced tower defense. Instead of placing towers only in one place, players can set the towers they want across the map. Also, players can upgrade the power of the towers to increase their strength. Not only stopping there, but players will also experience many new attractive elements.

Junkworld has a pretty unique plot. The world order was turned upside down when man was not the ruler. Instead, it was a ferocious army called The Order who turned the world upside down. In this post-apocalyptic world, you don’t face a single threat. A variety of evils have been brought to trouble you. In this war, your main task is to lead your team through rugged terrains to find new life. The arid deserts, radioactive swamps, and battlefields are the challenges you have to face. Besides, it would help if you found a way to overthrow tyranny in this chaotic world. An intelligent strategy and skillful control are the keys to getting you through it all.

The gameplay of Junkworld is similar to Kingdom Rush. You need to build a solid empire with defensive towers and resist the attack of the enemy. Especially, this game allows you to place towers anywhere on the map. Just drag and drop the cards to identify the tower successfully. If you want to get an effective turret placement, observe the green circle appearing around your tower. It will signal an effective enemy attack range.

Besides building protective towers, you can deploy nine different types of tactics. Every kind of tactic will increase defense and the ability to fight against enemies. Note, the game will limit the number of turrets and strategies at each level. You can only place up to four types of turrets and four different strategies. In addition, you will face waves of fierce attacks from enemies from all sides. Therefore, if you do not use the right strategy, you will lose immediately. When you win the last wave of attacks, you’ll get EXP, gold, cards, and materials.

Towers are not just static structures. Instead, it will come with unique abilities and support you in combat. Junkworld offers 11 towers with various abilities. Some of the towers’ basic skills are flamethrowers or sniper rifles. Some of the advanced skills are turning enemies into sheep, broad area attacks, etc.

You can upgrade your towers to give them special skills. Each skill type will require a different amount of materials and energy. If you don’t have enough materials, try to complete missions to unlock powers and abilities. In addition, before starting the match, you can combine tower types to increase their power. Plus, carefully consider tower placements to minimize the possibility of damage.

The number of quests you can challenge in Junkworld is up to 40. All of these challenges are designed differently to test your mettle and reaction. You will fight a variety of monsters in many different locations. One of them is Trash Man, Machine Gunner, Fire Trucker, Mortal Mortar, etc. Besides, you can fight in the two most harsh terrains: wasteland and radioactive swamp. These terrains have a large number of enemies and high attack turns. When you win battles and complete daily quests, the system will give you generous rewards.

Battle cards in Junkworld are an integral part of strategies. Each card will bring a different fighting ability. Some popular cards are:

These cards all have different attack and damage stats. Therefore, if you want to kill enemies quickly, upgrade them. Upgrading is extremely useful in the tough battles ahead. There are two ways to boost cards: using gold or unlocking from the quest completion rewards. If you’re lucky, in some missions, the system will give you cards with special skills.

The world of Junkworld is relatively small but extremely impressive. Although the soldiers and towers are mini, they are designed in quite a detail. Plus, the map with different terrain is the main highlight of the game. It is impressive and gives a special fighting feeling. Moreover, the sound when the armies fight is also attractive. It gives you the sense of participating in an actual match.

Junkworld is currently in beta so it is only available in the app markets of a few countries, including Brazil, Canada, Singapore, and some North American countries. In case you can’t find this game on Play Store, you can follow our instructions below to download and play Junkworld soon.

First, you need to install a VPN app to change your device’s IP address to a supported country. We recommend Turbo VPN and Hotspot Shield Premium.

Obviously, this is the optimal choice because it is much simpler. All you need to do is download the APK file we provide below, then open it and install it as usual.

In case you have problems, please refer to this article.

Junkworld is an impressive free tower defense game that will make you spend hours overcoming challenges. Download this game now and enjoy the feeling of strategizing to win great matches.