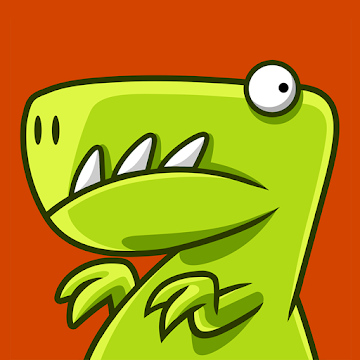 Revive prehistoric dinosaurs and place them in the crazy park to attract visitors to Crazy Dino Park right away. This construction and puzzle game will make your idle time enjoyable and memorable.

Dinosaurs went extinct millions of years ago, but we have proof of their existence. We are talking about fossils. Archaeologists have found thousands of fossils of dinosaurs that once existed on earth. Unfortunately, today’s science and technology are not advanced enough to revive these giant creatures. We can only imagine their appearance from fossils. You know, what is impossible in reality is possible in games! And this case is no exception. Crazy Dino Park allows you to revive dinosaurs from fossils then build a big dinosaurs park.

Crazy Dino Park, developed by Infinite Dreams, is an engaging puzzle and building game. It gives you the chance to become an archaeologist and scientist who finds and brings dinosaurs back to the present. It also helps you experience the life and work of those who built the famous dinosaur park in movies you have watched. You will constantly be immersed in new scientific discoveries and research about prehistoric dinosaurs. The game has a fun style with vivid images and sounds. If you are looking for a puzzle game for fun, this game will not disappoint you.

Your main goal in Crazy Dino Park is to excavate, revive dinosaurs and build an epic park. You don’t need to waste time looking for locations with dinosaur fossils. The reason is that the game already predetermines these locations. Move according to the game’s instructions to start searching and excavating.

The game will charge for the excavation site. Therefore, you need to pay a certain amount to be free to explore these areas. Initially, the amount was relatively low, only about 50 to 100 coins. However, they will increase gradually over time and your level. As you enter the excavation, try to remove the top layer of soil by swiping locations on the screen. After the dirt is terminated, you will see many fossilized specimens of different dinosaur parts.

Try to dig as deep as possible because precious fossils are not on the surface. Note, the number of tools provided for this excavation is only three machines. Each machine will help you destroy a rock or a stratum. If you fail to find the required fossils, your expedition will fail. It means you will lose the original amount.

Put the excavated samples found in the blueprint

Once the fossils are found, please pick the fossils up and attach them to the pre-existing excavation blueprints. You won’t find all the required fossils in a single design during a single excavation. Therefore, sometimes, you have to destroy many different geological formations and rocks to find suitable fossils in Crazy Dino Park.

Initially, the level of detail of the blueprint and the number of fossils needed will not be much. As you level up, it will gradually increase, forcing you to increase the speed and range of excavation. You will have to dig many times in more different locations. If you are not successful the first time, try again because the results of this excavation are very desirable. Fossils of extinct dinosaurs are impressive and will surprise you.

You are not only an archaeologist; you are also a scientist in Crazy Dino Park. The game provides a lot of dinosaur species for you to excavate and revive. When you bring a dinosaur to reality, you can see its overall shape, characteristics, and behavior. There are two ways for you to revive these dinosaurs: collect enough fossils or breed them through the lab.

With the obtained dinosaur fossils, you can revive them. Note, they are only successfully resurrected when you collect all the parts in the blueprint. For example, you need to collect enough head, ribs, extremities, or tail bones. When finished collecting, use the elixir the game provides to revive them.

Besides collecting, breeding dinosaurs through the lab is a fun activity. You need to collect the required resources, including DNA and fossil samples. Some particular dinosaurs will have higher requirements. The result of this crossbreeding is adorable dinosaur eggs. Then nurture and wait for them to bloom.

After you have revived the dinosaurs, you need to build a place to live and a living space for them. Crazy Dino Park gives you default parks; you need to earn money to unlock them. You can build more buildings during the park’s construction and decorate them. Buy and use decorative items to make the park attractive to visitors. Note, it will take time to finish a building. Thus, you can decrease the time by using diamonds.

Don’t you know that you can earn an additional source of income by selling tickets and collecting bonuses from visitors? If you want more money, open special events and sell new items. Investing in activities in your park will increase your reputation and money.

Build a squad of dinosaurs and fight in the arena

Not only can you focus on building the park, but you can also demonstrate your tactic skills in the PVP arena. Let take advantage of highly combative dinosaurs like T-REX and train them. Then, test their strength by engaging in combat with other players in the arena. The rewards for the winners are better than you think.

Embark on a journey to excavate, revive, and build a dinosaur park from the Jurassic era in Crazy Dino Park. Download this game now to enjoy moments of fun.