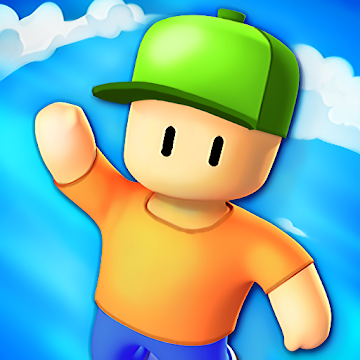 Stumble Guys: Multiplayer Royale is an entertaining action game developed by Kitka Games with gameplay quite similar to Fall Guys. Launched by an unknown developer, Stumble Guys seems to be very popular with players around the world. So what makes this mobile game successful? Let’s check it out!

If PC has Fall Guys, Mobile has Stumble Guys!

It can be said that this new style of Battle Royale game has stirred the gaming community throughout 2020. Even after only a few months of launch, the game has recorded 200 thousand online players and attracted the attention of millions of gamers to this day!

Up to now, the game has achieved more than 10 million installs on Google Play. And it’s hard to believe that this is the debut release of a publisher without much reputation – Kitka Games. The attraction of this game is not only for gamers around the globe but also for influential people like the world’s top streamers. They live to stream this match continuously on different platforms such as PewDiePie, Ninja, Pokimane, or Manchester City striker Sergio Agüero. This inadvertently made Stumble Guys become famous and known by more people.

It is known that Stumble Guys is one of the most successful copies of Fall Guys. However, for veteran gamers, you certainly know that Fall Guys has only been released on platforms such as Nintendo Switch, Xbox One, Microsoft Windows, etc., and is not available on mobile operating systems at all.

So how can you enjoy this game wherever you are, even if you only have your phone in hand? First, let’s come to the match Stumble Guys – a remarkable and lovely mobile version!

With gameplay similar to Fall Guys, this game allows 32 players to connect online to start exciting challenges to find the last one standing! There is no specific storyline; the player’s goal is simply to run to the finish line. There are dozens of absurd challenges and ridiculous and funny obstacles ready to “knock down” careless gamers in the race to the finish line.

Possessing familiar gameplay and a simple, easy-to-operate movement system, Stumble Guys uses a joystick consisting of two keys to move and jump to help characters overcome obstacles effectively! But, of course, to do that, gamers must be agile and skillful so as not to return to the starting line! In particular, this game also has countless beautiful and unique skins to bring the best experience to players!

Of course, if you stumble, you will be taken back to the race you passed, but that means being “slower” than your opponents. This fun race will give 16 places to the winners, and the rest will receive fewer rewards and no ranking points. So, from 32 random players, can you pass them all and win?

Become the King of Racing

In the match of Stumble Guys, up to 32 players will participate, and the competition for the finish will be exciting and equally fierce. When “falling down,” the player will immediately be brought back to the starting line to start his race again. The race only ends when there are 16 people at the finish line. Instead of having lousy play situations: attacking and knocking down opponents, etc., this game brings obstacles to make it difficult for players.

At first glance, these obstacles are pretty easy to overcome, but in reality, they are not. The blocks are arranged with dense density. Players must pay close attention to changing the direction of running and not running at the right time to avoid colliding with obstacles. If they push you into the cliff, your character will have to start from the original position.

I have also played through it many times and realized that it is not as easy as I thought. However, through the failures, I have learned valuable lessons and want to pass them on to all new players:

Remember that the Stumble Guys only care if you can finish in the top 16 or not.

Stumble Guys has a diverse map system. Unlike other mobile games, players will already know what pitfalls there will be on that map. But for this game, every time the race starts, the system will randomly select the map. Therefore, the pitfall elements inside the map will be renewed; players will not feel bored. On the other hand, the constant crashes that remove players and bring them back to the starting line will make the race more enjoyable than ever.

The challenges in each map are arranged in dangerous locations. So players need to be agile and alert; otherwise, you will have to start the race again immediately. However, in reality, not many people can only race once to reach the finish line. Trust me! You’re not the only one who fell many times!

The challenges here are also highly “silly; people are pushed down the cliff by a snowball, the other camera causes an accident, or the different slippery slope falls. Get used to that!

The game is also divided into two categories: playing games with friends or playing alone, bringing many exciting experiences. Players can create a room and invite friends to play the game and overcome the game’s challenges together. The challenges in the game are also divided into many categories depending on the player’s choice of single-player or multiplayer to experience the game.

Although the character system in Stumble Guys is designed to be extremely simple and does not have realistic elements like other games, they look very “fun.” However, you can completely adjust the appearance of the character to make it more unique.

If your default character is a police officer with a boring uniform and hat, you can make him more interesting. For example, instead of wearing a “stupid” cap, you can change his hairstyle to a more trendy hairstyle. Or change the uniform into a more fashionable suit.

In addition, this game will have different sets of skins, allowing players to make their characters more attractive.

It can be said that this is the most attractive “alternative” game for Fall Guys because the design, gameplay, control system, and characters are all quite similar and cause sympathy for gamers. The proof is that there have been more than 10 million downloads in the Android version alone and received highly positive reviews. The only minus point from the publisher is that the game has too many ads, causing a lot of discomfort and annoyance for gamers. But, finally, this is still a great entertainment game that Mobile gamers should try and experience!