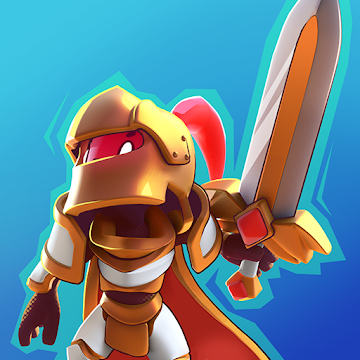 Knight’s Edge – An exciting action game where players choose weapons and fight to become the champion.

If you have been a veteran gamer of League of Legends: Wild Rift and Clash Royale, you will definitely like Knight’s Edge – the new game from Lightfox Games.

Knight’s Edge is a straightforward game; players and their teammates fight to destroy monsters and race to see who will be the top. This is a 3v3 multiplayer game; each team consists of 3 people to clear the dungeon.

In addition, it also allows you to participate in battles with AI in PvE mode or challenge your wits with other players around the world in PvP mode.

Join the game; you have to race in the fight against the monsters while also against the other team in the 3v3 multiplayer round.

It would help if you fought the enemy team to slow them down and get the ultimate glory to win.

It comes with a teleport system to block other team players, modify weapons, use swords, axes, bows, staffs, etc.

Although it has only been released for a short time, this game of the publisher Lightfox Games has quickly attracted players’ attention and the number of downloads is increasing.

Knight’s Edge has a straightforward control system suitable for all ages. You tap and swipe to move, tap to attack, and use your special attacks and abilities to turn the tide of battle.

In addition, You can deal more damage and deploy strategy as you unlock more weapons, new item cards from chests collected from victories. This is extremely useful when you want to ensure your chances of beating your opponent.

As you practice more and more, you will gradually level up and receive different perks for each match. From there, you can create countless options to destroy monsters and opposing players.

Players can also collect and upgrade different weapons of different elements. In addition, many exciting competitive activities stimulate players to climb the leaderboards to become the strongest.

In addition, you can stack enough cards to upgrade the fighting ability of the whole team. Moreover, the different combat ranges also affect how you arrange the characters in the team, making the whole team invincible against any strategy that the enemy makes.

The game Knight’s Edge has a series of different arenas, and you will need to conquer each arena in turn before going to the new area. In addition, each arena will have different loot items, attack groups, and final bosses.

It must be said that the graphics of Knight’s Edge is one of the highlights of this game. Attractive 3D images with cutely designed characters. Combined with images are effects that make the game more attractive to players than ever.

At the same time, the sound of the game is also very unique, you can hear the sound of weapons, running or cheering every time the character in the game acts. Overall, although not designed too meticulously, this game brings excitement and attraction from the first time you play it.

Knight’s Edge is an engaging action game that is entirely free for everyone to download and play. For Android users, you can search for this game at google play and play it right away.

However, If you want to upgrade or need some in-game items that need to be purchased with real money, maybe for many people, the money spent on this entertainment is not worth bothering.

But the rest don’t like it, and neither do I. So I don’t want to spend money on anything if I’m not sure it’s right for me.

Or I want to try new things and don’t intend to use it for long, so spending money to buy an in-game item for me and some people is a waste.

If you don’t like it, you can turn off in-app purchases in your device’s settings. However, there are still ways for you to comfortably upgrade and buy items and weapons in the shop without spending any money.

Players need to download Knight’s Edge Mod Apk according to the link we provide above and enjoy it to the fullest. Then, feel free to do what you like in the game because, with this Mod, you won’t have to worry about any costs.

You must use intuition to fight and make the best use of your special abilities to clear your enemies and advance to new arenas with minimal casualties. After the final boss is defeated, that stage is complete, and you will receive a reward chest. Finally, try to get your name to the top of the leaderboards and claim the title of Knight’s Edge!