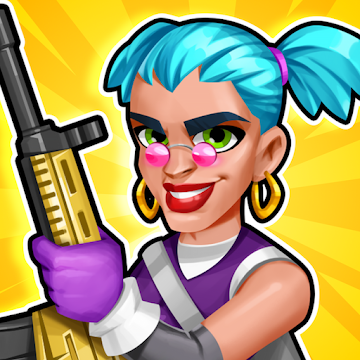 Darkness is the perfect condition for you to hide and defeat all enemies. Use your cleverness, dexterity, and special move tactics to victory in Hunter Assassin 2.

Ranked fifth in the field of the most popular action games, Hunter Assassin is a worthwhile game that you should not miss. Take advantage of this popularity, Ruby Game Studio has decided to increase the challenge for players with new levels in Hunter Assassin 2. A super-assassin reappears with more difficult challenges. Are you confident enough to defeat all the notorious gangsters with just one gun? Your enemies won’t use old attacks. They have equipped with modern weapons and special guard arrangements against you. If you are not brave enough, your every move can be detected. The result of this discovery was instant death. This thrilling action simulation game will give you feelings you never thought possible. Let choose the right weapon, attack your opponent’s base and kill them in silence and surprise.

Haven’t played the original version of this game yet? Try it now!

The first version of Hunter Assassin has reached more than 100 million downloads on the Play Store. Will this predecessor be able to reach that amazing milestone? Let us explore its outstanding features now.

Similar to Hunter Assassin, this addictive action game Hunter Assassin 2 asks you for maximum patience and dexterity. If you do not meet these two factors, the chances of you being caught by the enemy within a few moves are very high. Your enemies always have a flashlight and automatic gun available. Their mission is to guard the base and kill the intruders. Therefore, they are always on the move to observe the nooks and crannies.

On the contrary, your task is to hide in the dark, move reasonably and kill the enemy in silence. Besides, try to avoid the light from the enemy’s flashlight as if they see you, they will kill you right away. This light is the most thrilling factor because players must use ingenuity to have a reasonable move strategy. Note, every time an enemy is detected, you will be deducted one LifePoint. If you lose all of these points, you lose. Moreover, the way to control the character in the game is also simple. Use the buttons available on the screen to move your character the way you want.

The original assassin you own may not fully meet your skill and speed needs. Therefore, the developer has improved the appearance and upgraded the strength of the assassins in Hunter Assassin 2. The number of added assassins is also increased for you to choose from. Based on how many diamonds or gold you collect while playing, buy these assassins. With enhanced speed, chosen assassins will help you quickly complete your goals. Besides, you can observe the Assassin’s Health and Damage stats to understand their skills. If you feel these stats are low, don’t waste your money, but update them to achieve maximum combat skills.

In addition, weapons in the game are also added and upgraded. You can choose from a variety of guns like Sniper, Heavy Shotgun, Burst Rifle, etc. There are many ways to own these weapons such as buying them or unlocking them from the items received. Some guns will be unlocked when you reach the required levels. Moreover, guns also have levels, so don’t forget to upgrade guns to kill enemies faster.

If the level in the old version made it difficult for you, the difficulty level in Hunter Assassin 2 is even more interesting. The number of diverse levels is also diversified for you to challenge your playing skills. Especially as you complete the higher levels, the number of enemies and the difficulty level increase. Enemies will move continuously and the extension of the light is also larger. If you are not careful, you can easily get blocked and killed. The number of enemies appearing in an area is also more. Sometimes you can meet a group of 2 to 3 enemies. When faced with this situation, the best way is to kill enemies in odd areas. Then destroy the remaining enemies.

For each enemy you successfully destroy, you will receive a valuable item. If you can’t pass these high levels, use LifePoints to pass the level. Therefore, try to kill as many enemies as possible. The number of enemies you kill will correspond to the number of items you receive. These special items can be money, diamonds, weapons, or a special character. In addition, as you progress through new levels, you can unlock more weapons and heroes.

Boosters are a familiar concept across games. You can find them on many games like Candy Crush Saga, Angry Bird… Depending on the game content, the system of boosters is also different. Simply put, they are support items that bring special effects. They make it easier for you to win a level.

Hunter Assassin 2 allows you to choose one booster for free before each level. You can then activate it at any point during the game. When you activate your boosters, it will immediately effect the map. Here is the list of boosters available in the game:

Still taking the old construction site as a base, but all obstacles in this base have been added and arranged. A vast maze set with colorful wooden walls and crates. The aisles gradually become narrower so that the light of the flashlight can cover the whole. Your enemies are also guarded in many positions. More specifically, their range of movement in the base is also more. As a result, your safe zone will be withdrawn. This forces you to move faster, more often, and act more decisively. Plus, you will encounter many heavy weapons such as tanks or high-powered flashlights everywhere. Their destructive power is great. Therefore, you need to try to avoid them to not be destroyed. Faced with obstacles like this, what will you do to kill the enemy without a trace?

At the end of each mission, you need to fight the boss. Let’s win to complete the mission. Bosses always have powerful equipment and move wisely, so you need to know how to move and hide in safe places. There are several locations on the map where health potions are located. You can move closer to them to recharge.

Winning boss battles is the way to get diamonds, the rare in-game currency. You must win the boss battle to unlock new missions.

Try your luck with chest

When you complete a mission, you get coins, diamonds and chest as rewards. In which coins and diamonds are the two main currencies in the game. You can use them to buy new heroes and weapons. Chest can be considered a more special item. It contains bundles of items including weapon cards, hero cards, diamonds and coins. Hunter Assassin 2 has two types of chests, Regular and Legendary. Legendary Chests of course give much bigger rewards when you have a chance to get 50 rare hero and weapons cards.

You can get chests from completing quests or buy them from the shop with coins or diamonds. With the mod version of Hunter Assassin 2 that we provide in this article, you can use unlimited coins and diamonds to easily buy new chests.

Unlimited Money: You have a lot of coins and diamonds as soon as you enter the game.

Hunter Assassin 2 is currently in beta. So the game is currently only available in some countries and regions including Hong Kong, Canada, USA… So if you can’t find this game on Play Store, you can use a VPN service to change the IP address to a supported country. We recommend ExpressVPN Premium.

Your mission to destroy the infamous gang is ahead and waiting for you to complete it. Download Hunter Assassin 2 MOD APK then choose the right weapon to defeat all enemies right away.