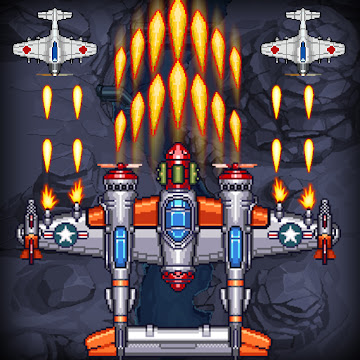 Air battles with fighter aircraft have always been an image associated with childhood for generations. Inspired by that, ONESOFT recreated through the aircraft shooting game – 1945 Air Force.

ONESOFT is the name behind many hit games like Falcon Squad, Edai Block Puzzle, and especially 1945 Air Force. All games released by this Vietnamese manufacturer are loved by a large number of players. With a mobile device that has an average configuration, you can experience hot battles. Besides, with the motto of bringing the best experience to players, this publisher always adds drama and suspense to create a highlight. All battles are designed specifically and vividly. Therefore, players will have the feeling that they are participating in a special combat mission.

The main context of the 1945 Air Force is in World War 2, where the wars for the colonies took place most fiercely. No one is unaware of the scale and impact of this war. In this game, you will be in the air force with the task of controlling the aircraft. The enemy always wants to occupy the territory and destroy the peace in the sky. Your mission is to destroy the total force and the entire air force of the enemy. It is a difficult task as destruction and death can come to you at any time. However, you don’t need to worry too much because you will be armed with the most advanced fighter aircraft. Therefore, this is both an opportunity to demonstrate your skills and challenge your fighting ability.

Basically, the context of the game is very clear but it does not have a specific story to explore. This makes the game surprisingly simple. You are dropped into a battle, sitting on your plane and rushing towards the enemy.

Although the gameplay in 1945 Air Force is not too complicated, you need to master many skills to win. You need to control your military aircraft and go straight into the enemy army’s stronghold. Then try to complete the assigned tasks in the shortest time. The aircraft are all equipped with automatic fire. Therefore, you do not need to use the buttons to fire. What you need to do is try to control the aircraft in the right direction. Depending on where and how you move your finger on the screen, your aircraft’s direction will change.

The sky above the enemy base is not safe. Reconnaissance aircraft and bombs always appear to destroy those who want to infiltrate. To successfully overcome these obstacles is not easy. Sometimes you have to use a lot of bullets to take down enemies while they only need one attack to make you lose. So, to make it easier for players to win, the game provides many support items. They are scattered across all levels. They can be items that change attributes, increases speed or strength. Try to move your aircraft carefully and collect all support items.

Fighter aircraft is the most important weapon and companion for an air soldier like you. Thus, 1945 Air Force offers players a variety of different types of fighter aircraft. Depending on the level you reach, aircraft with advanced features will be unlocked. If you want to get advanced aircraft in a short time, you can buy diamonds to own them. Note, depending on the level of aircraft you own, accompanying weapons will require the same level.

100 levels with many different obstacles and challenges are waiting for you to conquer. The level of each stage is also different. Therefore, you will be trained in aircraft control skills from basic to advanced. Moreover, the number of unlockable support items and fighter aircraft will appear more as you level up. In addition, at the end of each level, there is a boss with great power. It is very difficult to defeat this boss because its speed and ability to withstand attacks are very high. It will continuously shoot bullets until success killing you. Therefore, you need to improve your ability to avoid bullets. If you get hit too many times, your fight aircraft will be destroyed. Don’t forget to take advantage of the items obtained from the login and the lucky spin. These special items will help you pass the levels easier.

Two players can interact and battle each other through the 1945 Air Force. The condition for joint combat is that both of them have this game installed. Moreover, you can interact and fight directly with many players from other countries. On the other hand, you can link to Facebook to invite friends to play online.

Every week, 1945 Air Force will host many special tournaments that excite the players. Plus, these tournaments all come with attractive rewards and items. It has different levels, and you need to try to pass them with the highest score. There will be a leaderboard for talented players. Winners will receive specially designed and high-powered fighter aircraft.

Unlimited Money: You have a lot of money to buy and upgrade aircraft/ weapons.

Note: You have a chance to get banned if you use this mod.

Dramatic aerial battles with fighter aircraft will immerse you. Download 1945 Air Force MOD APK now to rule the skies and defeat the invaders’ base.