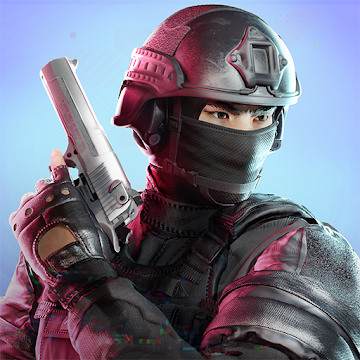 Standoff 2 is too familiar to enthusiasts of the FPS shooter genre. Battles with skilled warriors on the battlefield and dramatic gunfights will make players addicted.

Counter-Strike has changed the world of video games since its first version was released in the early 2000s. It is by far one of the most loved video games worldwide. CS GO has become a competitive e-sport with million-dollar tournaments. Over the years, many AAA first-person shooter games have been developed such as PUBG, Valorant, Apex Legends, etc, most of them are inspired by Counter-Strike.

Although there are millions of players who want to have the feeling of playing classic versions of Counter-Strike on mobile devices, that has never happened. Valve, the owner of this game series, said that they have no intention of bringing their product to the mobile platform. It is definitely sad news for mobile gamers. But there have been a lot of copies of the game released on the Play Store. Standoff 2 by Axlebolt is one of them. To be more precise, it is definitely the best.

Axlebolt developer has made a perfect copy of Counter-Strike with most of the familiar features including gameplay, graphics, gun system and equipment, and control mechanism.

The dramatic and engaging action of the FPS shooter genre always excites players. There are many titles in this genre released in the market. Although released later, the innovations and additions in the attractive gameplay have created an attraction for Standoff 2. Moreover, the top-notch graphics in the game also attract gamers’ attention. The predecessor of this game was Standoff 1 and was developed by Axlebolt. On the app market, this game has over 4.5 rating stars. Plus, it is always at the top of the most attractive FPS shooting games. Currently, the game is in the beta-testing stage, so it still lacks many features.

Standoff 2 was released at the end of 2017. Over the years, the game’s developers have made a lot of major updates to optimize the graphics and gameplay. What this game offers is a great FPS gaming experience that no other mobile game has.

Standoff 2 reimagines the classic Counter-Strike. There are thrilling and exciting real-time matches waiting for you. Here are the main features of the game.

Standoff 2 is an FPS shooting game with engaging realistic action. When participating in the game, you will transform into a real soldier with a special mission. The battlefield is where you go on a mission to destroy your enemies. Players are not only fighting on one battlefield. Instead, you have a wide selection of game scenes and battlegrounds. Moreover, the game allows you to choose friends or compete in clans in the lobby before starting the battle. In addition, making money in the game is also diversified. Players can commercialize weapon skins by selling them to the highest bidders in the marketplace. The more special the skin is, the higher the price will be. If you can sell them, you can get many profits.

There are three main game modes: Defuse the bomb, Deathmatch, and Arms race. Each game mode will provide a new perspective and different missions. For example, the Deathmatch mode will be limited-time matches. In this mode, players will fight in teams and attack enemies to earn points. After a certain amount of time, the team with more points than the other team wins.

Meanwhile, Defuse the bomb mode allows players to use bombs and plant them in areas. To destroy all enemies in this mode, the player needs to defuse all bombs first. When finished defusing the bomb and killing all enemies, the player wins.

On the other hand, Arms Race mode seems somewhat of the color of Battlefield and Call of Duty. When choosing this mode in Standoff 2, gamers need to use many different weapons to destroy the enemy. The player who owns enough Kills and armory becomes the winner. This mode requires players to judge the situation to choose the right combat weapon. Besides, gamers can change the skin for their weapons through the Skin system. This inventory opening mechanism allows players to renew weapons with special designs.

No matter what mode you play, players also need to practice reflexes and character controls. At first, you may find it difficult to control the buttons. However, it only takes a few days of practice to get used to it. Plus, to win faster, the quick judgment of the situation is also essential.

Gamers cannot go to the battlefield without any weapons. The more firepower a weapon has, the greater its damage to enemies. Standoff 2 offers players hundreds of different weapons like primary weapons, melee weapons, secondary weapons, and bombs of different destructive power. With primary weapons, many players ofter love using Winged, CyberPunk, Treasure Hunter, etc. With pistols, Neon and Nest are always in their combat types of equipment.

If you are a close-range fighter, melee weapons like Dragon, Blue Blood, Ancient will suit you. These weapons all have different designs and powers. They are not only eye-catching, but their fighting ability is also great. However, it is not easy to own these weapons. Players have to go through difficult missions or spend a large amount of money to get them.

Single action does not help you win the enemy easily. Instead, fighting with teammates will help players defeat the target quickly. Team formation is also optional, so players can invite their friends to form a team. Standoff 2 always emphasizes teamwork and requires teams to agree on a reasonable attack strategy. During the battle, players on the same team must support each other to win. The game provides an online chat feature for members to conveniently discuss. Gamers can use chat boxes and messaging to discuss tactics with teammates.

Standoff 2 is a mobile game, so the developer has optimized its control mechanism to suit this platform. Everything has been made simple to keep the pace of the game fast and thrilling. You use the joystick on the left side of the screen to navigate your character. On the opposite side are action keys including aim, shoot, sit. Besides, there is also a key to quickly switch between weapons and grenades.

In case you want a better playing experience, we recommend you use supporting peripherals such as a keyboard, mouse, or gamepad. Of course, the game does not allow direct connection of these devices, but you need a third-party application to do that. Octopus app is definitely the right choice.

Graphics in Standoff 2 are impressive and attract players at first sight. The battlefield scene is meticulously invested from small details. It gives players the feeling of fighting suffocatingly on a real battlefield. Besides, the investment in character creation, weapons, and physical motion effects is thorough. The sound of moving and gunfire is also highly realistic, making the player feel the most realistic. Moreover, in the timed modes, the battles become even more intense. Thus, gamers feel like they have to as fight as join the race against time at once.

Standoff 2’s excellent gameplay and graphics will never let you down. Download this game, choose the weapon that suits you and defeat your enemies on the battlefield with your teammates right now!