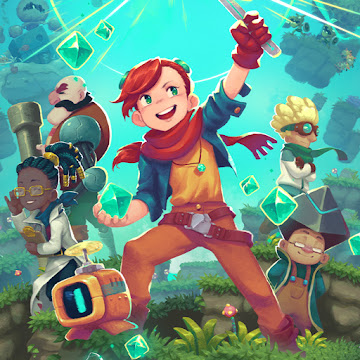 Sparklite is an action-adventure game set in an ever-changing land. You will have to fight enemies from a top-down perspective.

Prepare yourself for this strange new journey, exploring dangerous corners of the randomly generated world. Don’t forget to take advantage of the diverse arsenal of weapons, guns, and equipment to take down the giants and harness the power of Sparklite.

You will accompany Ada on the planet Geodia in the midst of a global disaster. The cause is that Baron, an evil prospector, used the Sparklite element to dig deep within the planet for evil purposes. Ada quickly discovers that only she can stop Baron and his crazy plans.

Fortunately, she’s not alone in this arduous journey. The inhabitants of Geodia all possessed unique traits that could be useful to Ada. Geodia City will soon become your base, where you can recruit new adventurers, customize load-outs, and purchase upgrades. You can do this with Sparklite, Geodia’s natural resource.

In general, Sparklite is a game worth trying. It comes with an engaging storyline and almost no dialogue. Ada and her robot barely interact with each other, except for a few rebuttal comments. This can make the player feel empty. So, it is quite a shame.

An Interesting Journey in the Spark

In general, Sparklite will be a familiar experience for you if you have ever experienced the Legend of Zelda game.

This game has four biomes available, including Goldenwoods, Vinelands, Shifting Sands, and Acid Bog. Each of these areas contains unique enemies and a unique boss battle.

Once you defeat the boss of each area, you will be able to use their power as your own.

However, it is not easy to defeat the four titans using only Ada’s wrenches (Why doesn’t she use a sword? We will never know). It is essential to collect “widgets” and “patches” by exploring each biome. These items give you valuable upgrades, such as more damage, extra health, healing, explosives, or speed boosts.

“Patches” are passive rewards that you can find in almost every corner of Geodia. You can slot them into a kind of inventory system in the medical center. Health patches, which add extra hearts to your life pool, are the most abundant. Additionally, you can also find unique patches that increase damage, reveal maps, and recycle consumables.

Be careful! every time Ada fails, she not only loses her current items but completely changes the world of the game.

I enjoyed my short time with Sparklite but I still want more. This game will be very suitable if you are looking for something new to the top-down action-adventure formula. It’s a fun game that’s worth a try.