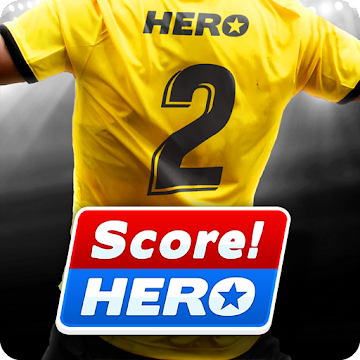 Score: Hero is back with the second title of this hit mobile game series. There are many new improvements in graphics and gameplay waiting for you to discover. Don’t forget you can download the latest mod for Score! Hero 2 at our blog!

It is undeniable that football is the king of sport. Almost everyone is in love with the fierce matches to compare the strength, skill, and flexibility between teams, and celebrate together as a country when they win. As a grasp of this trend, many game developers have launched their own product as a way to please people who love both football and e-sport. We can’t help but mention some huge phenomena such as FIFA 15 by EA, Rocket League by Psyonix, etc., and later on, Score! Hero 2 by First Touch Games.

Score! Hero 2 exploits another side of the traditional football game. Those are important situations in a match. Players act as the hero of the team by giving options to assist or score and win against their opponents. Not long after publishing the game, the number of people downloaded reached more than 10 million with a 4-star rating on the Google Play platform. Let’s go deeper and find out more about this masterpiece in the article below.

It can be seen that Score! Hero 2 does not have many core gameplay changes compared to the first version. However, there are quite a few worthwhile improvements to make it an interesting football game that you should not miss. Join us to explore its outstanding features now.

Sequel to a legend

If you are a huge fan of soccer games, the series of “Dream League Soccer” is probably no longer something strange. As a surprise, First Touch Games is also the developer of this legendary that was once a must-have game of the soccer-head. Decided to make something different but still preserve the intriguingness of the genre, a new hit was born – known as Score! Hero 2.

Although we would like to call it a sequel and the same genre, the gameplay and experiences are unique regarding the 2 games. In Dream League Soccer, you will control all 11 football players respectively whereas in Soccer: Hero 2, you will only focus on 1 player at a time. It is encouraged that you should try both games from First Touch and see which will suit you better. In this article, we will put the eye on the sequel more.

What to do in Score! Hero 2

Unlike other soccer games where you will be in charge of the whole team of 11 players like we have mentioned above, coming to Score! Hero 2, you will only have to focus on the one-star player – or should be known as the “Hero” of the match. Why is he called a hero, you asked? Well, this specific character that you will be controlling in this game will be the key to goals or at least participate in a scoring action. In short, like the developer stated: “You’ll be at the heart of the action as you guide your Hero from hot prospect to global superstar!”.

So, what exactly do you have to do to score your way to superstardom?

As you get into a level, your character – the “hero” – will be put into a crucial moment where they are leading the ball really close to the opponent’s net. Your task is to draw a line and the hero will shoot his shot according to that. Of course, the line that you have to draw should not be blocked by an opponent’s player or the goalkeeper. It is quite easy in the first several matches which you will only have to draw a straight line to win. As you progress through the game, sometimes, you have to pass the ball to one of your teammates and let him do the trick. Overall, the gameplay is quite straightforward, but to a lesser or greater extend, hard to master.

Build your own hero

When you first log into Score! Hero 2, you will be able to create your character, who later will be the “hero” of the match. There are hundreds of possibilities as you are able to customize the character from the smallest detail such as the nationality of the character to the most obvious ones like hairstyles or skin color. Perhaps the developer thought that football was a sport that should only be for men, so there was no option to create a female character in the game. This may seem a bit unfair but that’s okay, playing experiences in Score! Hero 2 is still great.

This character-building stage is based solely on your interest alone and will not have any effect on your strength, skills, or anything. However, playing with the character that resembles your interest will be much more interesting, isn’t it?

Bringing the ball inside the opponent’s net is just the main task, there are some more requirements that you should meet to get a perfect 3-star. The hard part is that requirements are hidden until you have finished that specific stage. So, it is quite common that you will have to replay several times before making the absolutely perfect goal.

To the players who are thinking about skipping the hard work of trying to get all levels a 3-star overall, we have bad news for you. As you have completed every level in a season, you have to reach a specific number of total stars in order to be eligible and participate in the next season. So, it is advised that you should try your best and replay enough level to go for those stars.

Before each level, there are different goals that you need to complete if you want to get the maximum score. These goals are random and quite varied so you always feel challenged when starting a level. For example, there is one level that requires you to score a goal and make an assist from under 15 yards while in another level you need to make more assists. At higher levels, you can face more difficult challenges such as scoring with one touch, shooting at a specific location on the goal. We realized that scoring and winning a game is not a difficult task. But the important thing is that you need to complete the goal of each level to receive a maximum rating of 3 stars.

Don’t think that the stars are useless. The plot in Score! Hero 2 is divided into several stages. Each stage consists of several levels. If you want to play at a new stage, you need to reach the required number of stars.

After finishing a season, you will be rewarded with some boosts to help you in the latter stages when things got harder. There are a total of 3 different boosts, which are Rewind, Energy, and Checkpoint. All of them are extremely helpful and will let you complete a level with ease. We will leave the interesting work of discovering the boosts to you but remember to use them when you are quite desperate as they are hard to find.

If you’ve played Score: Hero before, you definitely realize that the 2nd version of this series has a huge improvement in graphics. The players in the game are designed in more detail with their bodies and facial expressions. Besides, the movement mechanism of the players is also simulated more accurately. You will see the players move, dribble, and shoot like in real life.

To increase the challenge in the game, the developer has limited your number of plays with the energy system. It includes 5 hearts. Each heart is divided into 4 smaller energy sections. It means you have a maximum of 20 energy to play. When you fail a turn, you lose one energy. If your energy level goes to zero, you need to wait for it to recover or buy a new one with in-game currency.

We’ve found that the currency in Score: Hero 2 is pretty pointless. Sometimes you don’t even know it exists. After each turn you win, the reward is cash and stars. You can only use cash to buy energy. If you want to fill the entire energy bar, you need to pay 100 cash.

Similar to Candy Crush Saga and many other Android games, Score! Hero 2 allows you to quickly log in with your Facebook account. Your progress will then be saved so you can sync it on your new device. You can absolutely play Score: Hero 2 as a guest, but it’s not a smart choice. It is recommended that you log into the game to ensure that your progress is not lost when you install Score: Hero 2 on a new device.

Score! Hero 2 is definitely a must-have game on your device if you are both a gamer and soccer fan. With new, inventive gameplay but still, be able to preserve the intriguingness of a football genre game, you will not be disappointed at all. What are you waiting for without downloading and trying it out right away!