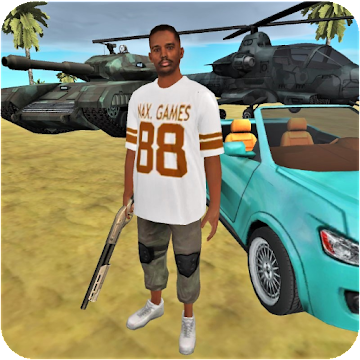 Have you ever thought of a criminal world where gangs are free to robber to prove themselves? If you want to know what that world looks like, the fascinating action game – Real Gangster Crime will lead you.

Real Gangster Crime by Naxeex Studio is an engaging action game for those who love gangster games. This is a 3D third-person shooter combined with exciting RPG elements. When joining the game, you will experience fascinating street life in an open 3D world. As a genuine gangster, many exciting actions are waiting for you to perform to prove yourself. Although this is a criminal world, harsh laws are still in place to protect the rest of the world. Therefore, this seems to be a dangerous and challenging place that forces you to use all your skills and knowledge to succeed. If you feel confident and ready enough, choose the right weapon and start taking action. A flood of fake competitors is presenting, so you need to expose them. Also, a large underground empire is waiting for you to build and strengthen. Join now and do everything like a real gangster.

The GTA 5 by Rockstar Games inspires Real Gangster Crime. The game simulates the life of a criminal in the underworld, where there is no law. Starting from the bottom of society, he joins arms smuggling and fights with other gangs to become the leader. On the Play Store, Real Gangster Crime is even more successful than the titles in the GTA Series when it reaches more than 100 million installs and receives millions of positive reviews from players.

If you want to try living in a law-free society, try Real Gangster Crime. All social principles have been gone. You transform into a criminal and do whatever you want.

The world in Real Gangster Crime is a large modern city with tall skyscrapers surrounded by slums. Despite its location in the arid desert, the lavish lifestyle of the people here makes it stand out. This city is not simple as it is a sin city where fake and real gangsters carry out robbery even in the morning. They commit crimes regularly and haunt all the people. You are also one of them with the desire to build a big gang and successfully organize big robberies. Your starting point is just an ordinary bandit with old weapons. However, with the ambition of wealth and power, you do not stop carrying out attacks. As your money becomes more and the weapons you own are more advanced, your dream officially begins.

When entering the world of Real Gangster Crime, you will be tested on your endurance, agility, and ability to control weapons. Your initial default weapon is a sharp knife. You need to use this knife and move around the city to complete the missions. For each completed mission, you will receive money and diamonds. This money helps you level up skills and buy better weapons. In addition, the way to control the character in the game is also simple. You can move the character with the movement buttons on the left side of the screen. To attack or shoot, tap the attack button on the right side of the screen. If you want to use different weapons, tap the weapon icon. The operation in the game is smooth. Thus, you do not need to worry about lag issues.

The number of missions you can experience in the game is diverse. The missions’ difficulty level depends on your attack speed and skill. These missions are constantly updated, so you always have something new to experience. Some typical missions are car robbery, attack fake gangs, attack police, or rob money. The position to perform the task is also diverse and different. You will be alerted to mission locations. Also, obstacle warnings appear for you to know. If you want to move to the mission’s location quickly, the map at the top of the main screen will help you. A radar with a detection function will help you identify enemies and obstacles for you to avoid. Try to complete the task well to get bonuses and diamonds. The more tasks you complete in Real Gangster Crime, the bigger the bonus you get.

The weapon shop in the game gives you many choices, from multi-function knives, grenades, AK guns to high-damage guns. Each item will have different attack and speed stats. It also has several stars to show how effective it is at attack level. Before buying any item, you should consider the stats to choose the best weapon. Furthermore, as you complete more missions, the number of weapons unlocked in the shop will also increase. In addition, the number of weapons you can equip is unlimited. Therefore, no one can stop you from buying weapons to fight.

The game features a large rectangular map that simulates the city of New Vegas, where players will build their criminal empire. There is a full range of popular terrain types, including skyscrapers, beaches, farms, islands, and deserts.

You will have to move through all the places on the map to get and complete the missions. Real Gangster Crime offers a diverse vehicle system with many different types. Besides ordinary cars, sports cars, SUVs, racing cars, you also have the opportunity to find unique vehicles that are only found in fiction movies such as Robots, spaceships… In the store, you can easily find your favorite car models. However, most new vehicles in the vehicle require payment of money or gems to unlock. Don’t worry because the game mod we provide allows you to use the unlimited in-game currency. When you have unlimited money, you can buy whatever vehicle you want. It can be a unique and powerfully equipped tank or even a helicopter to fly to new locations quickly.

Change the character’s style and equipment

The more stylish your character is, the more enjoyable your playing experience becomes. Therefore, do not forget to change the style of your character. You can customize your character with costumes and options available. Another way to make his appearance more unique is by using items from the shop.

Except for the default outfit, which is free, you need to pay in-game money to unlock the rest.

Real Gangster Crime uses a fairly simple and intuitive control mechanism. It’s similar to the GTA mobile games you’ve played before. The control system changes based on your character’s status. When he walks, you have a joystick on the left side of the screen to move and two buttons on the opposite side, one to attack and the other to jump.

When you move near objects such as vehicles, weapons, and items, you can interact with them. The control system automatically changes when you sit on the vehicle. Then you have two arrow buttons on the left to navigate the vehicle moving left or right; the opposite direction is the accelerator and brake. Besides, if you are driving a car, you can turn off or change the radio channel in the car.

Unlimited Money: Money and Gems in the game automatically increase when you spend.

All missions set out in Real Gangster Crime give you a real challenge to prove yourself. Download this fascinating gangster game now to make all thoughts of domination and owning a big gang come true.