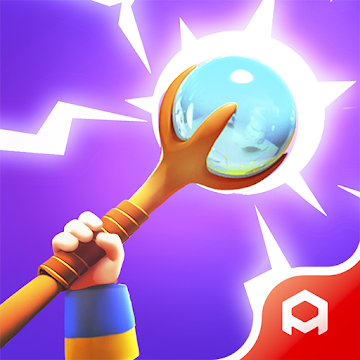 The laziness of Zeus caused the fade of his civilization. As a beautiful mage in PunBall, you will become the savior of this barren land, a skilled staff user, and defeat all monsters.

PunBall is a casual game that integrates Roguelite, RPG, and Block Breaker Gameplay. If the story in Bubble Witch Saga is about witches, Cut The Rope is about a mischievous frog, then this game is about a beautiful mage. Published by Habby on Google Play, its captivating stages, impressive graphics, and vivid effects will immerse you. Take a look at the cool features you will experience in the wizard’s journey to rescue this wasteland.

PunBall is the latest product from Habby, the creator of Archero. Therefore, it is not surprising that we find quite a lot of similarities between these two games. It can be said that PunBall is inspired by Archero to build the character system, map, equipment, and skills. The good news is that there is no boredom here because the gameplay of PunBall is completely different. In case you haven’t tried Archero yet, we’ve got an article about its mod HERE.

Zeus is the lord of the gods who can turn barren land into a civilization. The story of PunBall begins in this civilization. However, the prosperity of this land did not last long when Zeus became lazy. The evil lord, Shade, seized this opportunity to wreak havoc on them all. At that time, a powerful and beautiful mage appeared. She is the hero seeking light and peace for the land. In this game, you will transform into this powerful mage in a thrilling monster-slaying roguelike adventure.

PunBall’s gameplay is similar to casual bubble shooter games. Monsters will appear at the top of the screen and move down. You will stand at the bottom of the screen and try to stop them from approaching you. By touching the screen to adjust the direction of the marbles, you can shoot accurately. You can use laser, fire, ice, or lightning marbles to defeat all monsters. Besides, you can add different buffs to your marbles. When the number of marbles is increased, the monster killing range will be extended.

In the middle and late stages of each round, you will see a spike in the number of marbles with beautiful effects. That’s when you successfully pass the stage and get the bonus. The bonus is a lucky wheel that brings you the opportunity to receive new skills. There will be three skills unlocked, but you can only choose one. Try to complete them, so you don’t have to start over. Plus, do not forget to apply accumulated spells and skills to complete the level faster.

Thousands of stages to conquer

The number of stages in PunBall seems to have no limit. It leads the player from one land to another. Each stage will have a different design, monster, and energy needed to start a new one. There are up to 200 monsters for you to combat in each stage. In the early levels, the number of monsters is less and slow-moving. However, as you level up, you will encounter more monsters with the ability to move faster. If you do not destroy them in time, they will quickly come to you and make you lose.

Besides, some monsters cannot be destroyed in the usual way. For example, you need to freeze Vampires before killing them or use at least ten marbles to kill a Stone. Also, the number of bonuses that come with those monsters varies from stage to stage. The harder the monster is to kill, the higher the bounty amount.

Bosses are always present on a map. They usually appear in the final stage. In some maps, you have to fight 2 or 3 bosses at some specific stage. Of course, the battles are not easy. Bosses often have the same skills as basic monsters, but the damage and size increase many times. For example, on map 5, you have to fight a boss that has the same healing ability as the base monster, but it is huge in size with over 1 million HP units.

Defeat the boss to complete the level. It is also a chance for you to get good drop items.

PunBall provides a lot of equipment for your mage before she enters combat. There is a lot of special equipment from basic to advanced. You can change the costume, socks, shoes, rings, or even armor for the magician. Each piece of equipment will give the magician a different power. The higher the level of the equipment, the less time it takes for the mage to kill all the monsters. You can buy equipment directly from the shop with coins or diamonds. Before each stage, the game allows you to combine six different pieces of equipment to increase the mage’s power.

The equipment in the game is divided by rarity, including Normal, Good, Rare, Epic, Perfect Epic, and Ancient Legendary. To upgrade an item to a higher level, you need to combine 3 of the same type. Equipment can be obtained randomly during the level, from events or lucky chests.

When an item is upgraded, a special effect of it is unlocked. You can also increase the stats of the equipment by upgrading them. To upgrade an item, you need scrolls, which are dropped in levels.

Use more than 100 different skills

The mage in PunBall can apply up to 100 skills. There are two ways to acquire these skills. The first is to collect them from the lucky spins after completing the stages. The second is buying these skills from the store with coins or diamonds. The more advanced the skills are, the more money you will have to spend. These skills affect the performance of the marbles. Some skills you can use to attack are blizzard, big flame, lightning, combo, etc. If you know how to combine these skills, you can create many attacks.

What will your magician do while you are offline? She will assist in collecting EXP, energy, items, and gold until you return to your journey. The limit time for collecting can be up to 16 hours. Besides, depending on your level, the amount of gold and EXP is also different. The higher your level is, the more EXP and gold you can get. Therefore, even if you are not in-game, it still helps you collect more resources.

Currently, it is not available.

PunBall not only satisfies players with gameplay, but its cartoon-style graphics also delight them. Also, fun sounds with different designs for each stage will keep you playing non-stop. Download this game now and enjoy the feeling of becoming a magician on the journey to find the light for barren land.