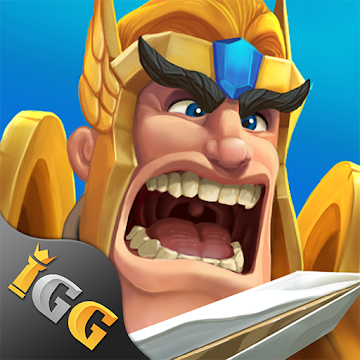 Are you passionate about claiming the throne and ruling the land with thousands of soldiers? Join Lords Mobile – the most popular and exciting real-time strategy game available today.

Once upon a time, you witnessed the fierce competition of real-time strategy games with Clash of Royale, Clash of Clans, Boom Beach… One of the explosive breakthroughs, immersed players in the world. The new fighting world is Lords Mobile. This is one of the very interesting strategy games. Heroic battles with monsters or mighty armies from others will immerse you. If you want to be the modern Zhuge Liang, this game is the place for you to show off your military talents. You will own your land and start building a powerful army from the initially available items. You are also the one who directly trains your army. Battles also happen continuously for you to prove your true prowess. Create your military world now.

Lords Mobile is developed and published by IGG.COM, the creator of many popular mobile games on the Play Store such as Brave Trials, Castle Clash. Similar to most of their other products, Lords Mobile is a real-time strategy game. It takes you into a fantasy world where you are a great commander tasked with leading your army to fight the enemy and build your invincible empire. More than 100 million downloads and 7 million positive reviews from players are clear proofs of the success of Lords Mobile!

Lords Mobile is a tactical game, so it’s not difficult when players need to apply thinking and calculate many aspects. Perhaps the gamer’s brain must always think to find a way to develop and protect the kingdom. When participating in the game, you need to learn how to build facilities, harvest farms, upgrade troops, train generals, .. especially always prepare for unexpected matches.

When joining the world of Lords Mobile, players will be introduced to the basic steps of the game. The game will guide you to accumulate resources by building simple structures. You also learn how to produce food, the elements needed to build barracks, and train soldiers. After completing training and having a strong army, you can bring troops to invade other players’ territories.

Moreover, the player will become the leader of an army consisting of Archers, Infantry, Stone Throwers, and Armored Cavalry. With each different battle terrain and opponent, the legions also need to be arranged differently. Some terrains require you to use the Stone Thrower. However, there are battlefields where you need to mobilize the Iron Cavalry, etc. In addition, some other empire-building features also interest you.

Build your army of heroes

Battles in Lords Mobile take place in real-time where you control a party of 5 different heroes. You need to order these heroes to attack the enemy to win. The hero system in Lords Mobile currently has more than 40 different characters. They are divided into units based on strength attributes. Besides unique attributes, each hero has a different skill system that you can take advantage of in battles. You also need to upgrade your heroes to unlock new attributes and skills.

New heroes can be unlocked when you complete in-game quests or win in-game events. You can also use real money to unlock a new hero by buying them directly from the in-game store.

Immerse yourself in dramatic battles

Gamers can find out two forms of war in this game: War and Questing.

When choosing to fight in War, your task is to knock down the opponent’s wall. This battle is played automatically. Therefore, if you want to win, you need to be well prepared. Upgrading the squad and arranging good tactics will help you a lot. If you prepare a good strategy, you can win even if the opponents are stronger.

Questing allows you to participate in a life-and-death battle as a real commander. There is no automation here and you need to prepare and act on everything. This mode allows you to choose tactics to attack, defend or choose which team to go to battle first. Each army will have its skills, so you need to consider the situation to make an accurate decision. Win or lose depends on your command of the army.

Build your own empire

The key element in strategy games is construction, and so is Lords Mobile. If you want to create a strong castle, gathering food, wood, stone, ore, etc is essential. Some buildings that produce materials and resources you can build include Quarries, Ore Mines, Sawmills, Farms, etc. All these resources are used to serve the barracks and build your stronghold. The constructions also become more as the player’s level increases. Steel strongholds or solid facilities are also unlocked for you to strengthen your empire. Besides, your barracks also become more and more crowded as your level increases. At this point, you can take advantage of the large barracks to strengthen your troop formation.

Interact with other opponents

The world in Lords Mobile is not just for you. It enhances player interaction to stimulate gamers to try to build their empire even more firmly. Don’t you know other opponents exist just like you and are ready to challenge? Battles from other players happen very often. You always have to be ready to fight even against opponents you don’t know. To increase the drama, you can move your stronghold closer to the enemy. Of course, at close range, an active attack is easy. Another special feature is a world map created with players from all countries. At this point, you not only play against players from the same country, but you can also compete with world players.

Despite the classic fighting style, Lords Mobile still impresses with its modern graphics platform. Sharp 3D graphics combined with bright and vibrant colors make players feel the world of battle but still beautiful. All backgrounds and images are realistically designed. Also, castles, fortresses, or other facilities are designed in detail. In particular, the system of beautiful generals and main armies gives players a real feeling in each battle.

What’s more, the sounds from the battles are also epic. The sound when the warriors rushed into each other created a feeling of overwhelming, dramatic. Each character in your army also has a different sound. Players will experience from one surprise to another. Besides, each different context also has a distinct sound characteristic, making each experience feel like you’re playing in a new era.

With the goal of creating a balance in the game, the developer does not provide special membership benefits packages. Instead, all players in Lords Mobile have the same starting point. All players are VIP members. However, the VIP level will depend on your hard work. Depending on the VIP level, the benefits you receive are different.

Initially, you have VIP 1 as default. The maximum VIP level is 15 and you have a long way to go to conquer this milestone. To level up to VIP, you need to use VIP points, which are earned by completing in-game quests. You can also pay gems to level up to VIP. If you work hard enough to complete the quests in the game and use gems properly, you can reach the maximum VIP level without purchasing in-app purchases. However, it will take you a lot of time if you want to reach VIP level 15. There is a simpler way to achieve this goal by using the mod version that we provide in this article.

Overall, Lords Mobile is an excellent RTS game with beautiful graphics and dramatic matches. Download this game now and build the most powerful empire right away.