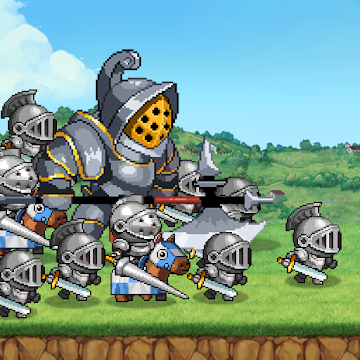 Following the fascinating story of Dragon Storm, Kingdom Wars was released for players to continue their journey to avenge the debt of the past. Intriguing from the storyline and addictive with excellent gameplay, gamers will have memorable playing experiences.

Springcomes is not afraid to bring its brainchild – Kingdom Wars to battle with other strategy games on the market. If you like strategy games that delve into content and gameplay, you shouldn’t miss this game. This does not mean that the game’s graphics and sound make you lose interest. On the contrary, it is quite interesting with a beautiful cast of characters and attractive scenery. Besides, the capacity of this game is not too large, so you can rest assured about the worry of memory not responding. Let’s find out what aspects make this game stand out.

On the Play Store, Kingdom Wars has reached more than 50 million downloads. It is one of the exciting tower defense games on mobile that you should not miss. Here are its standout features.

The game’s plot does not stop at the invasion of monsters or protecting the people in the kingdom. You will have the opportunity to understand the reason why monsters invade this land. It serves as a compelling addition for players to understand the cause and effect of the plot in Dragon Storm. Therefore, players will see a short video about the destruction of the monsters at the beginning of the game as a provocation. Plus, it also introduces the battle of the dark forces and the hero that seals the dark lord.

Coming to the world of Kingdom Wars, you will transform into a soldier who is both unlucky and lucky. Unfortunately, he was born in wartime and had to fight if he didn’t want to die. Furthermore, he accidentally drew the sword that was sealing the dark lord. However, the fate of becoming the hero that sealed the dark lord chose him. Miraculously, this warrior was lucky and brave enough to win and marry the sword spirit girl. After winning, he became king and ruled the country with his beloved wife.

Kingdom Wars does not force players to think much or exert all their energy to understand how to play. Its gameplay is simple, so anyone can get started right away. Unlike Dragon Storm, which forces players to role-play and fight continuously, this game is designed with defensive strategy gameplay. Players need to do everything to defeat the monsters while preserving the country’s safety.

With a goalkeeper style, players will constantly receive attacks from monsters. Equipping armor and the necessary weapons is what you need to defend. The main screen of the game will be divided into two halves. On the left side of the screen is your army. On the left side of the screen are enemies with hordes of ugly monsters. The army of monsters will continuously attack with a variety of weapons to destroy your castle. Thus, you need to choose and send out troops to fight. When their attacks are too large, you need to use special skills. However, you cannot use these skills more than once. They have a limited number of uses, so you should only use them in emergencies.

You can’t keep an old city forever without upgrading it. Especially in this defense game, you should upgrade your castle and skills for better defense. Characters and ramparts are two attributes you need to upgrade in Kingdom Wars.

In addition to the two factors above, you need to pay attention to upgrading food because this is the most necessary thing in the battle. You cannot create new soldiers without food. Therefore, maximize the speed of food generation to win all battles at a faster speed.

Various soldiers and the level’s richness are the things that bring a sense of curiosity to the player. With attractive levels, Kingdom Wars makes players unable to stop fighting to open the next screen. Moreover, since this is a strategy game, you cannot pass the levels without a proper strategy. The difficulty of the game will increase gradually through each level. Therefore, don’t look at the ease of the first levels and lose the tactical preparation in the later stages. Also, don’t forget to use tactics every time you upgrade your stronghold and character. If you update randomly, you’re just wasting resources and not getting any results in combat.

Diamonds and gold will be the two currencies in Kingdom Wars. Gold will be used to upgrade characters and ramparts and players can earn it by overcoming challenges. However, this amount of gold earning from these levels is not much. So, it can’t satisfy your needs. Moreover, you can’t earn diamonds bypassing the level. Instead, let deposit money into your game account or watch ads. When depositing, you can exchange diamonds for gold to have more money for upgrades. In addition, players can use diamonds to gain rare characters or VIP soldiers. The strength of these soldiers is quite large and the fighting power is also high. Moreover, in difficult levels, you can only pass the level by using VIP soldiers.

Kingdom Wars has two main currencies including diamonds and coins. Basically, you can earn them by winning levels or completing quests to unlock achievements. Coins are the base currency and are easy to earn. You definitely get some coins after winning a level. Whereas Diamonds are enhanced currency. It’s very hard to find. You only have a chance to get diamonds from special levels or unlock achievements.

You use diamonds to summon new units. Coins are used to upgrade units and other items.

If you are stuck in a difficult level because your army is not strong enough to defeat the enemy, then Kingdom Wars MOD can be an option to save you. The mod allows you to use unlimited coins and diamonds in the game to unlock new units and upgrade them to the maximum level. Surely you will easily complete the difficult levels in Kingdom Wars.

If you are passionate about defense-style strategy games, you should not ignore Kingdom Wars. Download the game now to challenge your reasoning through attractive levels.