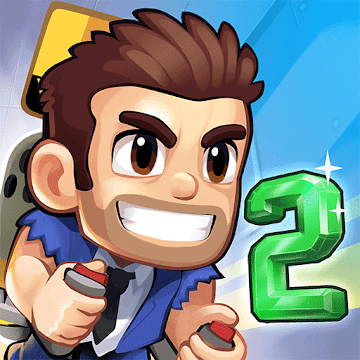 Jetpack Joyride 2, the sequel to the Endless runner-style series, has been released to players recently. For those who are passionate about this genre of game, Jetpack Joyride is not a strange name. This original version was released early on September 1, 2011, on Android, iOS, PlayStation Portable systems by publisher HalfBrick Studios. After about a decade, Joyride 2: Bullet Rush has finally been officially completed and launched in Canada, Australia, and New Zealand and will soon be released globally.

Can this sequel once again bring back the honor of its creators like the original version or just an attempt to keep its product from being forgotten by HalfBrick Studios? Let’s check it out!

Halfbrick Studios has long been known as one of the reputable publishers in the gaming industry. The products launched by these publishers all hit the milestone of hundreds of millions of players because of the top-notch fun and entertainment they bring. It’s no surprise that the Jetpack Joyride 2 project is the most anticipated this year.

It cannot be denied that the heat of this game is partly due to the success of its original version. To know what Jetpack Joyride 2 is like or different from its original version, is there any improvement or not? Why don’t you download the game here and experience it now?

Main Features in the Game

I was not too surprised with the features included in the Jetpack Joyride 2; they are very familiar, almost like their predecessor. But there will be improvements worth noting. Check out what’s new from the developer below!

Barry is Back and Better Than Ever

It seems that Jetpack Joyride 2: Bullet Rush does not have many gameplay changes compared to its previous version. The storyline is still a clash between Barry – the game’s main character and the “clique” of the mad scientist’s organization.

Maybe this mad scientist is paranoid or bitten off more than he can chew; he is trying to plan a plan to rule the whole world. As a matter of fact, adversity makes a man wise, that is Barry – the hero who wears a bullet-powered jet machine to fight all those dark plots. But I think this war seems to have no end.

Do you feel that this sequel is no different from its original? Don’t rush; I’ll tell the difference right now! The publisher has promised that the latest part of this endless runner game will have more breakthroughs in graphics and gameplay. Your hero will be equipped with a handgun and confront the “big bosses” at each level. You can expect a more heady and powerful experience than before.

No longer as simple as the first part, Barry Steakfries will have to go through much more difficult challenges this time. Not only will the distance to the finish line be longer, but it also contains dense pitfalls and, of course, countless enemies. In addition, you will need to control the character to both fight and dodge traps; otherwise, the game is over, and you will have to come back for more. The speed of the game increases over time. The farther Barry ran, the faster his speed. Therefore, you need faster reflexes to avoid obstacles. When Barry collides with an obstacle, your turn fails. You can end it to start a new turn or pay coins to continue running at the point where the collision occurred.

However, some items added to support Barry in Jetpack Joyride 2 will also somewhat reduce the difficulty and increase the excitement for the player. So actually I find it’s not that difficult!

Jetpack Joyride 2 will bring more new weapons with new mechanics. Your hero will become a lot more powerful when equipped with powerful destructive guns such as flamethrowers, laser guns, and flame guns. However, what will make you crazy happy is when receiving power-up items. That combined with Barry’s weapons, what else is stopping you from reaching the finish line?

Unlocking new content in the game will cost you a lot of money. So don’t waste any chance to earn coins, diamonds, or experience points. They will help you feel less expensive when you want to experience something new in the game.

However, the reality is that no matter how hard you work, it can hardly be enough to pay any price for new content. This is the way developers use to get our money. And what it says is that the free-to-play concept for Jetpack Joyride 2 is not 100% accurate. Why can’t I play the whole game for free and still call it a free game? It’s absurd!

Another way you can earn a useful little bonus for what I said above. You can rescue hostages, dodge bounties on the way to the finish line. The hardest part is still challenging the zappers in the lab. In addition, confronting the Boss also helps you earn a lot of money.

Every time you complete a mission, your achievement points increase a little bit. When you reach a certain number of points, you will receive valuable rewards. However, I do not think that earning money is so easy. Sometimes it takes you days to pass a single level.

Jetpack Joyride 2 features new vehicles, including Big Stomper, Galaxy Ship, and Gravity Suit. Not only do they help you move more quickly, but they also act like armor to help you dodge damage from enemies. And you can also see them as your weapons; their destructive power is not trivial.

Also, general upgrade them for more critical damage, better defense, and faster movement. However, everything costs money in this game.

During your journey, when you gain enough scores to get the attention of the boss, you will have to fight it to continue the game. There will be a warning before you proceed to the boss area. Currently, Jetpack Joyride 2 has 7 bosses including Dr. Brains, Science Screw 1, Brains 2, Science Screw 2, Minertaur, Science Screw 3, and Mikhal (Final Boss). Each boss uses a different weapon and equipment system to bring you challenges.

The game’s fun and straightforward visual elements will make the battles you see as intense into fun and funny. Jetpack Joyride 2 will bring joy to players while playing this arcade action game. Unique effects combined with 2D graphics will make the game much more enjoyable. Not to mention that this game can also run smoothly on all your Android devices.

At the same time, the exciting background music and powerful sound effects also create a sense of excitement for players. So sure you can play for hours without getting bored!

With simplicity and accessibility and many attractive arcade action elements, Jetpack Joyride 2 will definitely be a good choice for Android gamers. However, perhaps the only downside of this game is the lack of free-to-play elements. If you use the Jetpack Joyride 2 Mod Apk version that we provide, everything will be solved! All of that will help you enjoy the exciting gameplay of Jetpack Joyride 2 to the fullest.