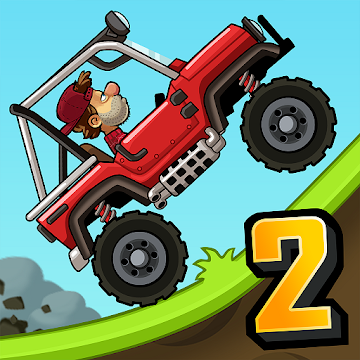 If you are a lover of off-road racing games, you certainly cannot ignore Hill Climb Racing 2. The game is developed by Fingersoft, a famous mobile game company. Currently, the game has reached more than 100 million downloads on the Play Store with many positive reviews from players.

The funny Bill from Hill Climb Racing is back in the sequel to this exciting off-road driving simulation! There are many new features that have been updated by Fingersoft in the second part of this game, but the player’s goal remains the same: Accompany Bill to steer his old car forward and go as far as possible.

If you have played the first version of this series, you will find the gameplay does not seem to be much different. You control an old vehicle with the main character Newton Bill or Jill to run along a road with countless obstacles. There is no difficulty for you to get used to the game’s control system. There are 2 pedals on either side of the screen, gas, and brake. By using these 2 pedals, you will control the car to move forward.

The problem appears when the track that you move is not normal. There are many obstacles, slopes, and cliffs that you have to overcome. Hill Climb Racing 2 challenges your driving skills to get the car through all these obstacles without tipping it over. Controlling the speed and braking at the right time is the key to your victory.

Besides the familiar main characters you met in part one, Newton Bill and Jill, you have the opportunity to control more new characters in this version. Currently, the game has more than 60 different characters for you to unlock. Each character in the game is designed with a different appearance and style. You can meet a bus driver, farmer, gold digger, and even aliens.

Before each race, you are allowed to choose the driver. Besides, there are many customizations for each character’s costume including pants, shirt, helmet, glasses… The characters do not bring advantages to help you win the race. It simply keeps you from getting bored. Most of the drivers are not available at the start of the game. For that, you need to unlock them by completing quests or buying them directly from the in-game store.

In the normal game mode (Adventure) in Hill Climb Racing 2, there is no endpoint in each of your turns. It is similar to other endless running games. The turn only ends when your car overturns or runs out of gas. So what is your goal in this game mode? The answer is simple, just try to control your car as far as possible and collect coins on the track. Coins are important in-game currency because they can be used to buy and upgrade items in the Garage.

The Multiplayer game modes are an upgrade point of Hill Climb Racing 2 compared to its predecessor. We’ll talk about this new game mode, Cups. In this game mode, you are connected with other random players and participate in a race in a short time.

After a few hours of playing the game, I realized that the “other players” you are competing within the race are sometimes not real players. They are randomly generated bots in the system. So they play pretty badly. That’s why you can easily win races to get trophies and unlock new maps.

Win races, you get chests, new items, and cups as rewards. When you accumulate enough cups, you can unlock new Cups. The terrain in each cup also changes and its difficulty also increases. Similar to the driver system in the game, you are required to complete the tasks in the game to unlock new cups.

Currently, Hill Climb Racing 2 has up to 12 different areas for you to participate in races. Initially, you can only run in basic locations such as Countryside, City, and Forest. However, when you collect enough stars to unlock new maps, you will encounter many crazy areas in the game such as deserts, mines, even under the ocean and on the moon!

Whatever the terrain, your mission is the same: win races and collect as many coins as you can. Each open terrain also brings new obstacles. For example, when you drive a car in the ocean, you may collide with fish or get stuck in coral reefs.

Vehicle collection in Hill Climb Racing 2 increased quite a lot compared to the first version. Currently, the game has 22 different vehicles for you to control. You can encounter many familiar vehicles such as Jeep, Scooter, MK2, Tractor, Motocross, Buggy… You can even control a snowmobile or a tank in races.

At the beginning of the game, you can only control an old Jeep. New vehicles can only be unlocked when you reach new levels in the cups leaderboard. For example, to unlock Snowmobile, you need to reach Platinum level 1. When you reach the highest level, Legendary, you can unlock a supercar with amazing speed. Some vehicles in the game can also be unlocked with coins. Besides the cars of the default system, you have the opportunity to control unique cars when participating in events in the game.

Every 2 weeks, the Moon event in Hill Climb Racing 2 is held. This is where you need to complete quests to unlock new items and vehicles. When you unlock a vehicle event, it is permanently in your vehicle collection.

Each vehicle in the car has its own unique attributes. These attributes are created based on the 4 components of the vehicle: Engine, Wheels, Suspension, and AWD. Want to increase your chances of winning Cups races? You are required to upgrade your car. You need to use coins to upgrade. Besides, there is another option for you to customize the appearance of the vehicle is to change the paint color.

One piece of advice we have for you is don’t buy a new car when you don’t have enough coins to upgrade it. For example, when you have 20 thousand coins, you can buy a Scooter. However, then you don’t have enough money to make upgrades to it. There’s no denying that driving a new car is more thrilling in races, but it doesn’t increase your chances of winning. Use coins to upgrade an existing car instead of buying a new one. Because when you upgrade your old car to new levels, its power even exceeds the new car you intend to buy.

Note that the cost to upgrade for each vehicle is also different. Basic cars usually have a relatively low upgrade cost so you only need a few thousand golds to be able to upgrade them to a new level. However, the cost to upgrade a supercar is huge. Don’t worry because Hill Climb Racing 2 mod that we bring in this article allows you to use unlimited coins to buy and upgrade everything easily.

Compared to the first version, the graphics in Hill Climb Racing 2 have been upgraded. Although the graphics core of the game is basically unchanged when creating the vehicle, the characters and terrain are still the same old style. However, the level of detail of everything in the game has been better.

Hill Climb Racing 2 still uses simple 2D graphics but bright game images to create a sense of fun for players. The collision and explosion effects in the game are also well represented.

You will definitely have a more pleasant gaming experience when using the mod version of the game that APKmazon brings in this article.

Why should you use Hill Climb Racing 2 MOD?

Most of the items in Hill Climb Racing 2 are not available when you start the game. To be able to own them, you need coins or diamonds. It is a fact that in-game currency is quite difficult to earn. You can get coins when you win races. If you are lucky enough, you have the opportunity to receive coins and some other items when opening the chest, but it is quite rare. To unlock vehicles and equipment, you need a lot of coins. Instead of having to save money to be able to buy them, you can easily buy everything with the latest mod of Hill Climb Racing 2 that we provide in this article.

Using the mod is obviously a simple and fast way for you to have a comfortable game experience.

Hill Climb Racing 2 brings upgrades compared to the first version to become a perfect game for those who are big fans of this series. Besides the fun gameplay, there are many different challenges waiting for you in this game. Please download the game via the link below.