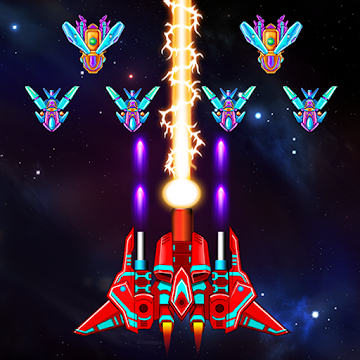 Galaxy Attack: Alien Shooter is the most popular arcade shooting game on Android with over 100 million installs on the Play Store. Become the lone hero in space, piloting your battleship to destroy the aliens.

As a kid, probably everyone has once found themselves spending hours in front of the computer screen playing retro games such as Contra, Mario Karts, etc. We can’t help but to also mention Chicken Invaders. After a while, there seems to be no mention of that game anymore among gamers. That is when developer OneSoft Global stepped in, make a revolution, and published Galaxy Attack: Alien Shooter. The game quickly gained more than 100 million downloads and an almost 5-star rating on the Google Play platform. What is the difference between Galaxy Attack and its “pioneer” that led to those impressive numbers? Let’s find out more in the article below.

Everything was good until it wasn’t anymore. The Earth was invaded with malevolent aliens with the ambition to take over and rule our blue planet. Of course, us human will not let this happen. Just like the game describes: “Earth’s last hope is in your hands, take control of the lone spaceship and protect Earth from alien swarms. Your goal will be quite challenging as you will have to save the Universe from its evil enemies”. Will you be able to do whatever it takes, combine with both your willpower and skills to eliminate the enemies? Prove yourself and the commitment in Galaxy Attack: Alien Shooter.

So, what exactly do you have to do in the game?

After selecting a level, difficulty, power-ups – which we will mention in the latter parts of the article – you will get on the spaceship to eliminate the swarms of enemies. The spaceship will release a storm of bullets automatically toward the aliens. Your job is to drag at the bottom of the screen to change the position of the ship and aim for the enemies.

Some of them can only withstand 1 to 2 hits, but tankers have much more vitality and can be used to shield the attackers behind. Therefore, apart from doing offense tasks, you will have to pay attention to the enemies’ rockets that can harm your ship. Dodge them carefully and find the opportunities to strike back is the key to win the game.

Head for the boss fights

Normally, each level will be divided into 3 to 5 waves. As you get to the last wave, there is a high chance that you will have to face a boss here. Of course, it is called a boss for obvious reasons such as high hit points, complex attacking sequences, and dangerous abilities. It requires a lot of skills and precision to be able to defeat a boss. However, once you are able to do it, the rewards are juicy, and it will be a piece of cake the next time. Besides, throughout the waves, your spaceship has already been upgraded by the power-ups released by the alien minions, so, believe in yourself.

The boss ship has a different structure from the minion aliens’ ship. It is bigger and divided into 5 parts that you will have to destroy individually. So, your movement in a boss fight needs to be more precise, both to dodge the attacks and choose a suitable part to destroy. After all, it is called a “boss” for a reason, right?

We mentioned power-ups multiple times above, so, what really is it?

Sometimes, upon defeating the minion aliens, there will be a power-up bubble released. Collect it and your spaceship will be strengthened. The most common one will increase the number of bullets per second of your spaceship. The effect is stackable so try and collect it as much as you can. Other power-ups are spaceship changing, maximum strength for a short amount of time, etc.

Not all bubbles are worth collecting, sadly. Some of them will be dropped very close to an attack from a different enemy. If you are not careful, your spaceship will have a hard time recover and you may have to do the level again. However, you need all those upgrades to fight the boss at the end, so, what should you do? The answer is in your hand. Decide wisely yourself which to collect and which should not be.

Fighting alone on the battlefield can be exhausting sometimes. This is when drones come to the rescue! Those are great partners that can provide massive help in attacking the enemies. Different drones will have different ways of attacking, choose your favorite one based on your fight style, and let’s roll!

Drones can be unlocked by using Parts collected from special Chests. You can purchase chests by using crystals obtained by leveling up. Some advice for you is you should gather enough crystals to open the biggest chest and maximize the rewards. Opening multiple small chests may not be as worthy as opening a Legendary chest sometimes.

If you think those weak aliens cannot stop you, try and combat with real players from around the globe! Doing this not only for fun, but it can also help you familiarize with different attacking styles, which will help you a lot in future battles. Moreover, you can also make new friends and allies here! Fighting with a companion is always better, isn’t it?

Galaxy Attack contains both the retro, nostalgic and modern vibes. Players will undoubtedly find themselves spending hours in front of their devices shooting those evil aliens. Why don’t you download the game right now and join the fun!