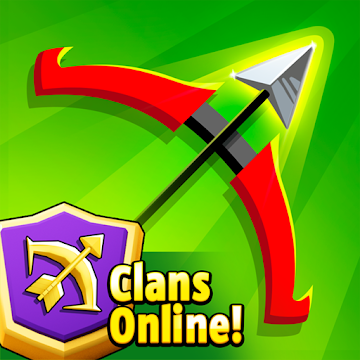 The evils are always behind you and take every opportunity to attack and destroy you. Do not be afraid of this force because the kingdom needs your courage and skill to destroy the enemy. Join Archero and experience the special features of the game.

Although not developed from a famous brand, Habby’s Archero still shocks gamers. The featured game of this publisher has many cool features in gameplay and graphics. With special missions and an excellent weapon system, it doesn’t need to take many steps to win the hearts of fans. Currently, players can join this game through two versions: on the Android system or the PC. Therefore, if you have not chosen a game to play in this boring epidemic season yet, do not ignore this attractive archery game. It will give you indescribable emotions and unforgettable experiences.

Archero is the most successful mobile game that Habby released. It has reached over 100 million installs and received almost 2 million positive reviews from players. Here are the characteristics of this interesting game.

A kingdom full of chaos and fighting is the main setting of Archero. Fierce monsters have risen and invaded your beautiful land. They are more aggressive and dangerous than you can imagine. As a hero, you need to take action to protect your kingdom. A specially designed bow and arrow will be your weapon against the forces of darkness. With excellent archery skills and bravery, let wipe out all the monsters from your kingdom.

Archero’s gameplay is similar to other traditional mobile RPGs. In each level, you control your hero (an archer) to move around the map and fight opponents. You complete the level when you destroy all of them. New levels are only unlocked when you complete the previous one. And an important point you must always keep in mind is that there is no room for any mistakes. Each cover map is divided into many different levels, as soon as you die, you have to return to the starting point.

The battle journey in Archero is arduous and full of pitfalls. Enemies are not at their base but will appear all the way you go. They are ready to attack and make you die instantly. Furthermore, the strength of the monsters is divided by level. Their power will increase as you reach higher levels. Therefore, if you want to survive their attack, you need to be vigilant on all four sides.

Not only monsters, the pitfalls that appear on the road are also easy to make you lose. Its level of danger is no different from that of monsters. Electric traps or fireballs will make you lose blood immediately. If not careful, they will stun you and slow down the game. In addition, you will be practicing your combat skills through missions. Each different level will give you different combat and crafting tasks. Try to complete them to strengthen your skills and increase your chances of winning.

The difficulty of the levels is always increasing so you need to develop your hero. There are basically three ways to strengthen your hero.

First, your hero has a chance to auto-evolve in each battle. As he wins the level and level up, you can choose new Abilities. The Abilities bring special effects such as increased damage from weapons, more HP, more effects on arrows, increased armor…

Next, you should equip your hero with the necessary items. These include Weapons, Armor, Rings, Spirits, Lockets, Bracelets. Each type of item increases a certain stat. For example, Armor increases resistance when attacked by an opponent and provides some unique effects. Meanwhile, Ring increases your hero’s damage to a specific type of monster. Items can be dropped from monsters when you destroy them. Some rare items can only be obtained during the event or purchased directly from the shop.

Finally, unlock and upgrade talents. They create permanent effects on your character. You need to spend gold to unlock a new talent. Similar to Abilities, talents apply specific special effects to heroes or equipment. The difference is that they last forever. When you spend gold, a random talent is automatically unlocked in a collection of 12. The higher the level, the more coins you spend to unlock them.

The levels are random

Basically, Archero is a Roguelike game. It has similarities to Dead Cells or Hades. Each chapter consists of different levels and you need to go from the beginning to the end without letting your hero die. When the character is defeated at any level in the chapter, you have to start over. This increases the difficulty of the game. However, it can make players feel bored by loops.

Don’t worry because the game developer has solved this problem. The levels in the game are built randomly. This means that all map characteristics such as objects, monster types, and traps change as you replay a new turn. Of course, Bosses in each chapter are the same but they can appear at any level.

After you complete chapter 4, Hero Mode is unlocked. This mode brings more challenges. You may notice the map’s appearance turns purple with overcast skies as a warning of new challenges. The levels in the chapter remain the same but the difficulty has increased several times. The monsters in the levels are stronger and the traps are also more dangerous.

Archero does not require players to have much experience in character control. Just follow the initial instructions and practice through a few levels, and you will be able to play fluently in no time. When participating in the match, the two main skills you need to do are running and shooting. For running skills, you need to touch the screen and move the character in any direction. Its movement speed is smooth, so you are never afraid of not avoiding an attack timely.

For shooting skills, let drag the bow and arrow; align the shot, and release to take down the opponent. Plus, before playing, do not miss the opportunity to choose the arrow’s type to fight better. You can select multiple arrows, +1 arrows, or bouncing arrows. By choosing the right one, your chances of winning will be higher. Moreover, the system also allows you to combine your character’s skills for an easy victory.

The weapon system, skills, and pets

The bow is your only weapon of combat. Therefore, it is not difficult to understand when Archero’s manufacturer focuses on the weapon system. In the first battles, your bow is limited to one-shot/time. However, the number of shots will increase, even reaching seven shots/time when you upgrade your weapon. To upgrade weapons, you need to spend money. The fastest way to earn money is to complete quests and kill monsters.

In addition to weapons, do not forget to choose and upgrade skills for your character. The game provides players with a variety of skills and powers to experience. Note, you need to pay attention to weapons and competition tactics to choose the right skills. Improper skills make it easier for monsters to take you down.

Moreover, in this battle, you will not fight alone. The lovely Pet will be your companion. They also have their powers and are ready to assist you in battle. Train them to attack enemies for you, increase damage and help you heal.

Tips: When you find a new weapon that’s better than the old one, you can remove the upgrades on the old weapon to get back scrolls and coins. Then use them one more time to upgrade the new one.

Archero uses an energy system to manage your game turns. You need to spend 5 energy units per turn. When your character is defeated, you return to the starting point and lose 5 mana. Energy points automatically regenerate every 12 minutes. Note that your energy bar has a limit of 20. It means you need 4 hours to fill this bar. In case you receive rewards as energies, they will be added to the total energy bar without being limited to 20.

Limited energy means you are not free to play as many times as you want. So always be careful at each level because just fail, you will waste energy. If you buy a BattlePass, your recharge limit increases from 20 to 30. You can also recharge by paying diamonds or watching some ads.

Archero does not only attracts gamers with the weapon system but also many attractive maps. Each map will have many different battle floors. On each floor, you will encounter obstacles and monsters with different strengths. When you reach the high floors, the number of monsters and their power will increase. They will be difficult to deal with and require you to deploy many advanced skills and weapons. If you don’t upgrade your weapons and skills, the possibility of “game over” is high. Therefore, be cautious in combat and try to win all battles. Try to complete all the floors in a map to unlock a new one with beautiful graphics.

A new chapter (map) is only unlocked when you clear all levels on the previous map. Archero currently has 26 chapters with loads of challenges. You have the opportunity to adventure to the underground dead lands or fight in a quiet and mysterious forest.

When you defeat monsters on the maps, there is a chance to drop their eggs. Once you have eggs, you can hatch them in your hatchery. You have up to 4 slots to hatch the eggs. In order for the egg to hatch, you need to destroy the number of monsters the egg requires. For example, with the bomb ghost egg, we need to destroy 300 monsters of the same type to make it hatch.

When the egg hatches, you get a monster. They are raised on your monster farm. The monsters on the farm always want to play with you. So play with them in your spare time by tapping the bubbles on the monsters’ heads. Occasionally there are random items dropped from monsters, you can pick them up. Clean these items to get unexpected rewards.

You need to enable the MOD feature before starting a level.

We bet you’ll find sites recommending a mod version of Archero, which allows unlimited use of in-game currency. Don’t believe it because it definitely doesn’t exist.

With the 3D design, vivid images, and attractive gameplay, gamers will be immersed in this game as soon as they fight on the first map. Let experience the feeling of defeating monsters and becoming the hero of the kingdom in Archero. Download the game now to see the quality and relaxation.